Angus Hanton, IF Co-founder, explains why reform of the triple lock on the state pension must be implemented on intergenerational fairness grounds.

The government is in deep trouble as a result of well-intentioned efforts to help pensioners.

Ten years ago they wanted to make sure that the state pension would not be eroded away, so they decreed that each year it should go up by at least inflation or the rise in the average wage. Or, if those didn’t increase much, it would still go up by 2.5%.

By raising the state pension by the highest of these three variables the government created the “triple lock”.  Over a period of time this mechanism acts as a ratchet and must inevitably lead to a significant real increase, whichever way you measure it. That is good news for poorer pensioners, but it is also a windfall for the many wealthier pensioners who are also receiving occupational pensions and other sources of income.

Younger recipients of the state pension are all in the baby-boomer generation who are the wealthiest generation ever: many of them have won the lottery of rising house prices, free university education, ample job opportunities, and increased longevity. And in paying for the state pension we are talking big numbers – the annual cost is over £95bn each year – equivalent to almost an eighth of all taxes raised.

An acute problem has arisen over this year’s triple lock increase in the state pension. The hike in the official number for average wages is likely to be a whopping 8% and, according to the formula, the state pension should rise by that much. But this is a total anomaly as it is the result of two technical and unprecedented covid-related factors.

First, the introduction of furlough payments meant that last year millions of workers only got 80% of their salaries so the return this year to 100% may not feel like a real increase, but it sharply bumps up the statistics on average wages.

Secondly, many of the jobs that have been lost have been lower-paying jobs in hospitality and elsewhere. The effect of these job losses is that “average” wages have increased which also artificially pushes up the earnings growth data.

The Work and Pensions Minister, Therese Coffey, must decide whether to follow the formula and if she does so the extra “accidental” pensions payment will be £4 billion next year, and every year thereafter. This extra cost will itself be increased by the ‘wretched ratchet’ of the triple-lock and will supercharge future increases to the pensions burden.

Already in the years that have been affected by the triple-lock on the state pension the burden has increased from £70bn to almost £100bn, over the last 10 years. This is partly because of the increasing numbers of retiring baby boomers, and longer life expectancies but it has been much boosted by the ratchet and maybe will see another 8% increase this year.

This boost has taken place at the same time as spending on children has fallen, so the net gap in government spending between children and pensioners has rocketed over the past decade. 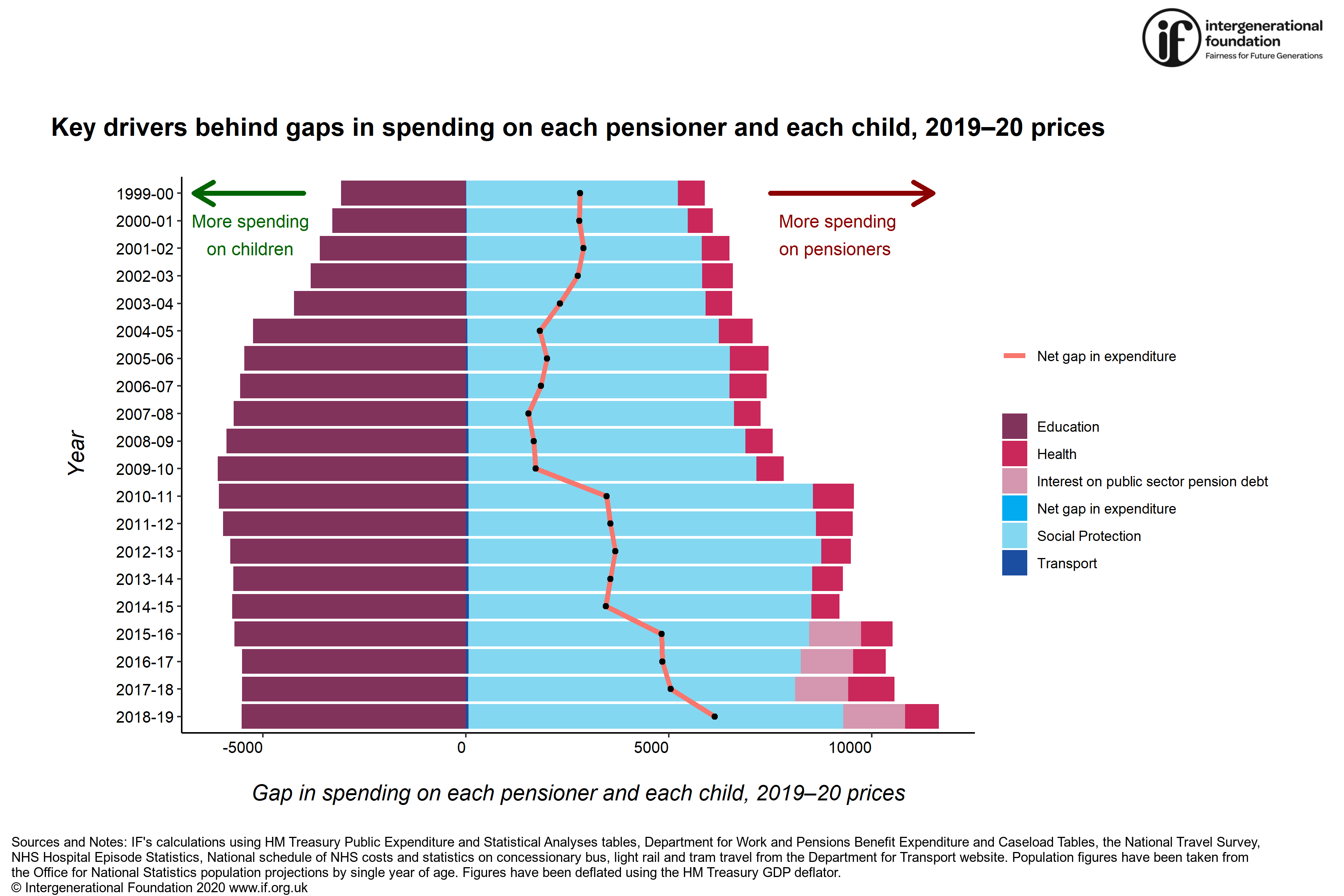 A graph from IF’s Age Bias report on government spending.

It depends which figures you look at but the effect of the triple-lock has already led to an intergenerational unfairnesss: an annual transfer from young to old of as much as £20 billion a year compared to simply indexing of the payments to price increases.

The current government has shown its willingness to break a manifesto pledge when circumstances change as it has done on its overseas aid commitment.  Maybe it is also time to unpick the triple lock and link state pension increases to the inflation index only.

An alternative for those who really care about pensioner poverty – as well as poverty amongst the young – would be to increase the “Pension Credit payment” for the less well-off pensioners and reduce the state pension for those who also have occupational pensions. Harold Wilson said that “one man’s wage increase is another man’s price increase.” But it is also true that one generation’s pension increase is another generation’s tax increase.

Photo by FLY:D on Unsplash