Recent figures released by the Breakout Institute suggest that 32 countries around the world have been able to reduce their emissions whilst achieving economic growth since 2005. IF researcher, Melissa Bui, explains what it means to “absolutely decouple” emissions from economic growth and how the UK is performing in this respect. 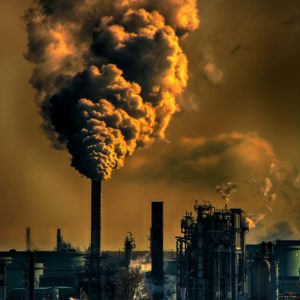 Historic trends in carbon emissions and real GDP have meant that, for a large chunk of history, rising emissions was considered to be the unavoidable reality for any growing economy. However, according to recent figures released by the Breakthrough Institute, an American environmental research centre, there is increasing evidence to suggest that countries around the world have been able to reduce their carbon emissions despite experiencing economic growth. In more technical terms, countries have been able to “absolutely decouple” emissions from growth.

But hasn’t economic growth been decoupled from carbon emissions for some time now?

Absolute decoupling, on the other hand, is achieved when emissions are declining whilst the economy is still growing, which is much more important for when it comes to meeting carbon targets. In the Breakthrough Institute’s research, a decline must be observed both in a country’s terrestrial emissions (emissions occurring within national borders) as well as its consumption emissions (which is related to the goods consumed by residents) for emissions to be considered absolutely decoupled from economic growth.

Excluding countries with a population below 1 million, the authors demonstrate that 32 countries have absolutely decoupled emissions from economic growth since 2005. The largest drop in emissions was observed in Denmark, with emissions falling by 45% since 2005. The UK was not too far behind with 37%, having experienced the second largest drop in emissions, despite benefitting from a 21% growth in real GDP over the same period.

What has been driving the reduction in UK emissions? Investigations conducted by the educational website Carbon Brief suggest that the reduction in use of coal for electricity generation has played a key role in driving down emissions, accounting for 40% of the total decline. Other factors, such as setting controls on emissions within manufacturing and waste industries (25%) and cleaner industrial and manufacturing processes (15%) have also played significant roles in driving emissions down.

Despite this large decline in emissions, the UK is still only halfway towards meeting its goal of net zero carbon emissions by 2050.

There is a danger that this momentum will not be sustained after the COVID-19 pandemic. Currently, the carbon budgets that the government has set, which is a limit on carbon emissions allowed across a five year period in the future, do not set us on track for either our 2025 or 2030 target.

Despite the economic and mental health damage it has caused, the pandemic has brought forward a key chance to stimulate economic growth whilst continuing to reduce carbon emissions. However, the government has a track record of missing key opportunities for green transitions. IF has previously written about the findings of a Greener UK report, which shows how, four years on from the EU referendum, there is still no evidence of a Green Brexit. The Breakthrough Institute has nevertheless demonstrated that we can rebuild the economy without the huge bounce-back in national emissions that is being anticipated as restrictions ease.

Part of the solution lies in government spending. Prior to the crisis, billions of pounds was being spent on awarding tax subsidies to major polluters such as the airline industry. This money would be put to better use if invested in areas which would help to keep us on course to meet our carbon targets such as be greater use of renewable energy, green technologies and environmental conservation projects.

Photo by Chris LeBoutillier on Unsplash