There is real concern that the younger generation will have a lower standard of living than their parents – which violates a key principle of intergenerational fairness. One issue at the centre of this concern is housing. IF supporter Rosie Neville sees it from her perspective and offers some solutions 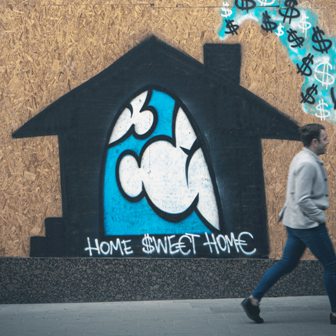 The decline in the homeownership rate among young and middle-aged adults in Great Britain has been a politically topical issue for the last few years. The drop in the proportion of young adults owning their own home is stark. Under-40s are half as likely to own a home as their parents were at their age. It is also projected that up to one third of Millennials will face living in private rented accommodation all their life. This compares to only 6% of the current over-65s being private renters.

There is a consensus across the political spectrum that it is much too difficult for young adults to get on the property ladder. As the ability of the under-40s to buy a house erodes, both intergenerational and interregional inequalities increase.

Is this the decline in homeownership actually a problem?

The desire to be a homeowner is firmly rooted in the British psyche – “an Englishman’s home is his castle” etc. I too have an aspiration in life to own my own house. However, after looking at the housing situation, this remains an aspiration and is not an expectation.

But is this even a problem? Should young people, like myself, just get over it?

Historically, most people didn’t own a home. In medieval times kings and lords owned all the land and let people live on it in return for servitude. However, we live in the modern day – therefore medieval peasants may not be the most illuminating reference points. I believe that the decline in homeownership is a problem that needs to be tackled.

Declining homeownership among young adults is a problem because benefits from homeownership are several-fold. Owning a property outright means that you can reduce your living costs as there will be no rent or mortgage to pay. Linked to this, conditions in the private rented sector are often poor. Additionally, owning property brings with it financial security – particularly given house-price trends – as well as stability, which is especially important to those looking to start a family. Furthermore, a home is an asset and therefore can be used as collateral for future leverage on lower-cost loans.

We need to examine, and seek to mitigate, the social and economic forces that are locking young people out of the property market and off the property ladder.

What is causing the issue?

There has been an explosion in house prices, especially over the last 20 or so years. Since 1997, the average real property price in England has risen by 173%, and by 253% in London. This rise has far outstripped average income growth, especially amongst the young.

Soaring house prices can be attributed to several factors, such as a chronic lack of supply and speculative demand from foreign nationals.

What does the government propose?

There have been many suggestions in the past few years, ranging from the radical to the ineffective. Back in October 2020, in his conference speech, Prime Minister Boris Johnson pledged to put “Generation Buy” on the housing ladder and create two million new owner-occupiers with the help of low-deposit (5%) mortgages. The logic behind this proposal is that deposits are increasingly unaffordable, especially as the costs of renting increase.

However, I contend that such a demand-side approach will likely be ineffective, and at worst counterproductive. The issue of this proposal is that improved access to finances leads to higher house prices. Such a policy will therefore benefit those who already own homes, not those struggling.

What do I propose?

Britain suffers from an acute shortage of new homes. The fact is that we are simply not building enough affordable homes. The solution, therefore, is to build more affordable housing.

However, this is easier said than done.

Housing supply is famously inelastic to demand. This is in part due planning restrictions and the attitude of “nimbyism” – “not in my backyard” – around housing. Most people are aware more houses are needed, but they don’t want them built near them and therefore oppose the building of new houses in their local community.

Here I want to consider two proposals that I believe can help: revisiting the Green Belt policy and the subdivision of existing large houses.

I am not suggesting we should tarmac the entirety of the Green Belt. Of course there is great value in preserving places of natural beauty and biodiversity. However, this does not describe the Green Belt in its entirety. Much of the Green Belt consists of brownfield land with little or no environmental value. Therefore I believe a pragmatic discussion around effective ways we can protect green spaces, alongside providing good-quality affordable homes, is needed.

Another approach which relieves housing undersupply may be the subdivision of big properties into smaller ones, such as creating a basement flat. In the last 20 years, under-occupation (having two or more spare bedrooms) has increased for owner-occupiers to 52%. Such an approach may be particularly appealing for older people who may wish to downsize but don’t want to leave their existing community. It may also have the added benefit of bridging the physical divide between young and old. Such “downsizing in situ” could be actively encouraged by government policy and financial incentives.

There is no magic bullet to solve the housing crisis. A judicious and imaginative mix of policy is needed. I hope the right action is taken in order to address the housing crisis… but I am not holding my breath.

Photo by Mika on Unsplash: https://unsplash.com/@mbaumi