The Office for National Statistics (ONS) has released research findings into the impact that the COVID-19 pandemic has had on Higher Education students, in collaboration with Universities UK, Public Health England, the Department of Health and Social Care, the Department for Education as well as a selection of universities. Liz Emerson, IF Co-founder, investigates the results of the Student Covid Insights Survey (SCIS) 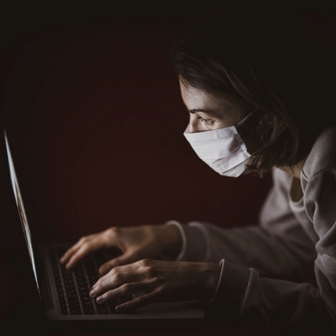 It’s hard not to feel sorry for this year’s first-year university students who, having successfully navigated a mutant A Level algorithm, rocked up to their student accommodation blocks rosy cheeked, bright eyed, and excitedly expecting the forging of new friendships and experiences, to then find themselves on virtual courses and all but imprisoned in student blocks of flats, accused by government and public health officials of being irresponsible super-spreaders of COVID-19.

We therefore welcome this research from the ONS, which seeks to understand better how students have fared this term. We must however start with the caveat that these are pilot studies and may subsequently throw up some statistical anomalies but, in general terms, the research can at the very least act as a temperature gauge for how students are feeling on the whole.

Of course, the survey found that transmission of COVID-19 spread quickly in halls accommodation. After all, student accommodation is designed to squeeze as many students as possible into arguably inadequate small living spaces with – as in the case of some halls of residence – 15 students expected to share one kitchen and a small number of unisex bathrooms on each floor.

The study also demonstrated that in the seven days prior to being surveyed 9 in 10 students were trying to maintain social distancing outside their university household, again undermining popular belief that students on the whole have been acting irresponsibly.

For students who had to leave their accommodation, the most common reasons reported were to buy groceries or visit the pharmacy, and to spend time outdoors for recreational purposes or exercise; this compares with fewer than 1 in 10 adults responding similarly to the same question over a similar period. Again, students have to share small freezer and fridge spaces and do not have access to large freezers of stockpiled food and therefore need to go to the shops more regularly than the general public.

Satisfied with their academic experience?

Unsurprisingly, close to one third (29%) of students surveyed signalled that they were dissatisfied or very dissatisfied with their academic experience in the autumn term. And frankly who can blame them? After all, these students were promised in-person teaching, and a “full” student experience as they were herded onto courses by higher educational administrators who could be accused of caring more about delivering on their bottom line than how courses charging an exorbitant £9,250 in fees could realistically be delivered during a pandemic.

In conversations we held on social media, few academics wanted to accept that “the offer” in 2020 has been below par. Instead, responses were over-defensive and, in some cases, wilfully ignored the fact that the online delivery of course material is simply not the same as in-person teaching.

Do have a listen to our podcast episode on tuition fees to hear for yourself how students have found it much more difficult to follow lectures online – with participants explaining that having to constantly reverse and repeat lecture videos to capture the points made has been exhausting and much more time-consuming.

With only around a quarter of students reporting that their university studies mainly involved class-based learning (for example, on campus in lecture halls, in classrooms or labs), it’s unsurprising that so many students feel let down by their course delivery to date, and that around 1 in 5 students do not intend to return to university accommodation after the Christmas break, piling more pressure on estates managers and finance departments to cut the fees on halls’ rental contracts.

Satisfied with their social experience?

When asked about their social experience, the number of students who stated that they were dissatisfied or very dissatisfied rose to more than half (53%).

These results from three different surveys conducted during November 2020 led to the conclusion that more than half of students reported that their wellbeing and mental health had worsened as a result of the pandemic, as they were compelled to self-isolate with people they barely knew for weeks on end, while treated like pariahs by their own institutions.

We were confident back in May 2020 that universities would quickly pivot to online teaching once they had secured students’ fees. It is why we pre-empted that decision-making by launching the #CutTheFees campaign in an open letter – with more than 100 signatories – to Michelle Donelan, current Universities Minister, in a national newspaper.

Obviously students navigating the wild west of the private rented sector will have a fight on their hands to get back the rent they have already paid, especially when so many landlords demand annual contracts with huge deposits. More action is sorely needed by students, student representatives and parents in order to put greater pressure on landlords to meet half way, so that students are not left to foot the cost of being unable to use their accommodation.

Advocates for the current income-contingent loan system argue that cutting fees has no impact on how much students repay over the next 30 years as repayments are based on how much students earn. What these wonks neglect to mention is how quickly the high interest rates, designed to front-load debt, rack up interest over time. Reducing fee levels reduces the overall debt and reduces the accumulated interest, thereby reducing the loan term, and that very much matters when repayments last for close to 30 years (when the outstanding debt, under current regulations, is written off). Most students are likely to earn over the threshold of repayment, which is currently and conveniently around the same level as the national average wage.

There is also an intergenerational fairness argument in that previous generations got their higher education for free, that we already have a progressive tax system that charges more tax the more you earn, and that older generations have designed a double taxation system on younger generations in order to avoid having to contribute higher taxes themselves for an education they themselves got for free!

Wellbeing at an all-time low

Levels of wellbeing among the student population have been falling for years. In all four wellbeing domains (life satisfaction, life worthwhile, happiness, low anxiety), a number of different student surveys have found that undergraduate students report substantially lower levels of wellbeing compared with the general population aged 16–24 years.

According to the ONS, in the Student Academic Experience Survey (SAES) students surveyed after 16 March 2020 (when most universities stopped face-to-face teaching) reported significantly lower levels of happiness than those surveyed before that date.

The ONS November study found that 57% of students reported that their wellbeing and mental health had become slightly or much worse since the start of the autumn term, which echoes findings from the journal Public Health that found that during lockdown, students – who as a group are not usually considered at risk of loneliness – now fall into the same high-risk groups as those groups considered at risk.

Give students a break

What the pandemic has shown us is that governments can choose to untighten their purse strings when they want. The government has so far this year spent £450 billion on pandemic response measures. It could well give all pandemic students a student debt holiday for around £18 billion a year – a very small amount in the scheme of things!