Exposure to higher levels of air pollution among mothers affects the likelihood of their grandchildren going to university 40 years later, according to new research from the London School of Economics and Political Science (LSE). IF intern Hugh Nicholl looks at the implications of these findings from an intergenerational perspective and asks what the government’s air pollution strategy could learn from the research 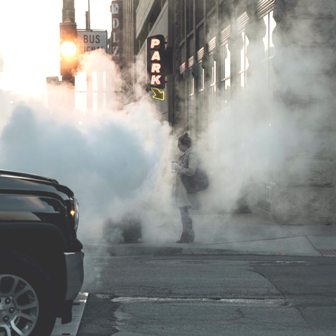 Children exposed to higher levels of air pollution in the womb are vulnerable to long-term harms to their health and welfare. Yet while there is growing evidence in support of these direct effects of variations in air quality, how far they matter for future generations – not just for those children directly affected by pollution, but for their children too – has to date remained far less clear. New research from the LSE’s Centre for Economic Performance (CEP) looks into these intergenerational effects. Its findings suggest that the effects of air pollution are not confined to those directly affected, but have implications for the educational prospects of future generations too.

How do improvements in air quality affect future generations? The CEP’s latest research uses the introduction of the 1970 Clean Air Act Amendments (CAAA) in the United States, which resulted in significant reductions in air pollution across much of the country, to isolate the effects of variations in pollution levels. Collecting data on the date and location of millions of births in the 1960s and 1970s, they compare the outcomes of children of cohorts born just before, and just after, the CAAA came into effect. The study goes beyond existing research on the direct effects of pollution by considering the children of those affected by prenatal pollution exposure. In doing so, the CEP’s research demonstrates the intergenerational effects of air pollution and the extent to which tackling it is a matter of intergenerational justice.

The study’s key finding is that a 10% reduction in prenatal exposure to particulate matter for those born around 1970 is linked to a 3­4 percentage point increase in the likelihood that their children would attend college 40 years later (or an 8% increase in college attendance relative to the mean). In other words, grandmothers with children less exposed to pollution in the womb will have grandchildren more likely to benefit from a college education four decades later. Once the effects of attending college on earnings are considered, the CEP study predicts a lifetime earnings increase of $1,515 for every 10% reduction in prenatal exposure in the previous generation.

The reason why exposure to air pollution has effects for future generations is that children less exposed to prenatal pollution – in this study, those who benefited from the CAAA – end up healthier and richer than those more exposed to pollution. This in turn leads to a greater ability to support their own children’s education, ultimately tying pollution exposure in one generation to college attendance 40–50 years later.

What are the implications of the CEP’s findings for our own attitudes towards air pollution? The key lesson is that pollution is not just a concern for those directly exposed to it. Instead, air quality shapes economic opportunities and wellbeing for multiple generations. Air quality does not just matter for health: it matters for economic opportunity, upward mobility, and overall wellbeing too, both within and across generations. Yet this issue of intergenerational fairness has been largely overlooked in the UK government’s air pollution policy.

The publication of the CEP’s study is particularly pertinent because of the ongoing transfer of environmental standards policy from the European Union to the UK. Both the government’s Environment Bill, which will introduce legally binding air quality targets from 2022, and the Clean Air Strategy 2019 on which it built, provide some hope that Britain’s departure from the EU will not lead to a relaxation of environmental standards. However, by focusing almost entirely on the immediate effects of pollution, there is a risk that the intergenerational dimension is being overlooked.

The CEP’s research, then, provides a timely reminder of the multifaceted ways in which environmental problems raise issues of intergenerational fairness. By demonstrating the harms that exposure to pollution entails decades down the line, the study contributes to our understanding of the urgency with which the problem of air pollution must be addressed.