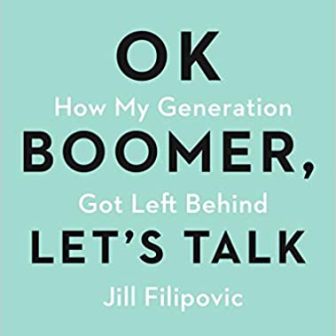 By contrast, Millennials often feel stigmatised and blamed for the predicament they are in, as well as for the troubles facing the whole of society.

The book, OK Boomer, Let’s Talk: How My Generation Got Left Behind, concentrates on the intergenerational divides in America and the unfairness between cohorts which has been brought about both by deliberate policy and by accident.

Filipovic recognises how lucky young Americans are by historic or international standards (“Yes, we know that in the grand scope of world history we are phenomenally lucky”), but she wants them “to have a reasonable shot at a good future”.

The book explains why young people wear OK Boomer T-shirts and why in discussions on social media they often despairingly simply post “OK Boomer”. It’s a challenge from the young to the old to realise how much damage the Baby Boomer generation has done and how that group has taken more than its share of society’s resources.

Jill Filipovic wants to move the argument on from an outline of how life is much, much harder for younger people than it was for their parents to a discussion about how things can be arranged more equitably between young and old.

Recognising, perhaps, the Baby Boomers’ grip on power but concern for their own children and grandchildren, Filipovic can sometimes sound like she is begging for help and ends with, “Give us a hand, Boomer – okay?”

OK Boomer‘s graphics are magnificently simple and every diagram shows something you can understand at a glance.

For example, one of them shows that, compared to 1980, Americans work an extra month each year. Another shows that house prices, even after adjusting for inflation, have more than doubled since 1970, and as a result many more young adults live with their parents – about a third of 18–34 year-olds, in fact.

Younger people are on social media a lot more than older generations, but tragically they are also more lonely. One OK Boomer illustration shows that 22% of Millennials say they have no friends, whereas for Boomers it’s only 9%.

In the biggest issue facing all generations, climate change, there is a marked difference in the way generations approach it.

Older generations are more likely to look at the climate crisis with profound grief and join the mainstream media in eulogising what we are losing, whereas Millennials are demanding immediate change. As the Millennial Representative Alexandria Ocasio-Cortez says, “This is our World War II.”

The younger generation (Gen Z, born after 1997) are even keener to see action now rather than at some indistinct future date, as illustrated by Greta Thunberg’s environmental campaign. The climate crisis is so concerning to Millennials like Jill Filipovic and her husband, Ty McCormick, that they are even reluctant to have children.

It’s a book to grab your attention, especially if you are older and want to understand why younger generations are so unhappy.