Rebecca Freitag – Ambassador for the Stuttgart-based Foundation for the Rights for Future Generations and a former UN Youth Delegate for Sustainable Development – has asked herself this question: “How I will explain this historic, COVID-induced opportunity for a new beginning to my children and grandchildren – and how it finally turned out?” She imagines the future letter that she hopes to be able to write. 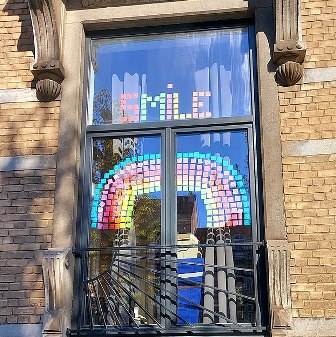 Can you imagine that back when I was a young woman, many people failed to think that one day you too would like to live well on our planet? That we were destroying our own quality of life by poisoning our soil, the air, the rivers, and threatening the complete eradication of countless plants and animals? That we produced things only to throw them away or even burn them? That we spent most of our lifetimes doing activities that made us unhappy? This world was absurd. It made us humans and our planet sick.

A virus, of all things, put an end to this madness. It interrupted our noisy, hectic, self-centred lives.

Within a few weeks our lives changed dramatically. We were barely allowed to leave our homes. Every day the number of casualties shot up; I feared for the lives of my grandparents, for the health of my friends. Income for survival was falling away; many of us were without a job. “The Future” became a great unknown that frightened us.

And yet we found ourselves in a comparatively privileged situation.

It was the first serious crisis that I had experienced so tangibly. But instead of remaining in a state of shock, many of us felt that it was the long-awaited opportunity for a new beginning. It was as if someone had pressed the stop button of our world. When I looked out of my window, I no longer saw cars, but children playing. Instead of exhaust fumes I breathed fresh, clear spring air. In this time of silence not only the air became clearer, but also our thoughts. “What was really important in life?”

Simply pressing “play again” was no longer an option. As we said then, no more “business as usual”. We began a new chapter in our history. And we saw how the impossible was made possible.

Only a few months before, we saw how politicians had smiled tiredly at the young generation’s loud clamour for greater climate protection and for more sustainability, and how they responded with ineffective measures. It was now apparent that the previous excuses for failing to provide a sustainable future, and dogmas on what could never be done, were invalidated.

They say that a crisis reveals true character. This crisis revealed that the good outweighed the bad. It revealed how we humans could help each other, hold together, and this gave us courage and cheered us up. On the sidewalk every morning I read the joke of the day, in the windows hung rainbow pictures painted by children, in the bus the passengers clapped for the bus driver, and for our older neighbours we younger ones went shopping.

The long-desired turnaround had come. With the energy of the many people who yearned for a positive and safe future, we were able to prove that a future free of crisis is a sustainable future by itself.

What at first seemed like a temporary aid programme was gradually turning into a trend: we helped local farmers with their harvest, and provided any missing products ourselves; companies sourced their materials and resources from nearby regions…

In short, we relocalised our supply needs, established trust and identity, rediscovered local and seasonal food plants and traditional knowledge, and created a resilient and sustainable local value chain.

Governments wanted to get the collapsing economy up and running quickly with economic stimulus programmes. But this was the long-awaited chance to tie those billions of Euros and Dollars to future-oriented (i.e. sustainable) criteria and thereby assist companies in the transformation. Traditional paths and dependencies that had been damaging to society at large could thus be left behind more quickly – because sustainable investment proved to be a crisis-proof and future-proof investment.

However, this perspective was not something that could be taken for granted. Can you imagine that many politicians played environmental protection off against economic development instead of putting them together? They suggested postponing the much-needed coal phase-out and the European Green Deal. But finally – and thanks to a lot of insistence from the people – the elected representatives opted for the most logical path: sustainable investments.

Aside from the many sufferings it brought us, the virus had the merit of removing the unnecessary and making us focus on the essential. We valued what had seemed unimportant to us for too long: community spirit, solidarity and honest care. We longed for exercise and recreation in nature. We realised that a lot of business travel could be digitally substituted. We understood that we had prioritised and valued the wrong things in our lives – and put our minds together to find ways to correct that in our society.

Ideas such as shorter working hours, universal basic income, and the circular economy fell on open ears. Instead of GDP, measuring the contribution to the well-being of society and the planet was called for.

As you see, the journey into the new sustainable world which makes your life possible has not been a walk in the park. Often, we feared that this crisis may also lead us on a path to an even more gloomy world. I am glad to say we had so many committed, courageous and positive human beings out there who have never stopped to believe in your future, the future of humanity. Several decades earlier, my parents’ generation saw with the fall of the Berlin Wall that many small changes could bring about a profound change.

In this spirit, we used the crisis as an opportunity to make a fresh start into a sustainable world. The world in which I see my grey hair, laughter lines and happy grandchildren today. The new world in which the planet and we humans are healthy.

It is my wish that you do not take our present good life for granted and that you work for a future that will also give your grandchildren a good life.

Your mother and grandmother Rebecca