The COVID-19 pandemic has taught us that future generations have to be protected by wise precautions – both medically and economically. Jörg Tremmel, professor at the Institute of Political Science at the Eberhard Karls University, Tübingen, Germany, shows how intergenerational interests are served by an assertive vaccination policy. 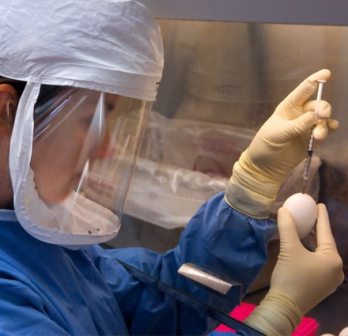 If generational equity means improving the life chances and conditions of future generations as far as possible, then the link to epidemics is obvious. For epidemics were – and still are, as we are now seeing again in the West – among the apocalyptic horsemen who bring death and suffering to people. We should protect future generations from foreseeable damage if this is in our power.

Especially thanks to the mandatory childhood vaccinations and the spread of penicillin and other antibiotics since World War II, we in the West have been able to afford to remove epidemics from the list of life risks we often think about.

In Germany, 16.5 times more people now die from the consequences of noncommunicable diseases than from infectious diseases. However, the latter have remained a serious threat to the lives and quality of life of the inhabitants of the world’s less developed countries. The worst infectious diseases are tuberculosis (1.2 million dead each year), AIDS (940,000 dead) and malaria (445,000 dead).

With the coronavirus (SARS-CoV-2), described for the first time in 2019, which causes coronavirus disease (COVID-19), a really dangerous pathogen has now reached the EU, the USA, Japan, Russia and other highly developed countries in addition to the waves of influenza, endangering the lives of a large number of people there.

During the lockdown, we have often heard the sentence: “There is no glory in prevention.” However, the concept of precaution (prevention) has been interpreted rather one-sidedly by epidemiologists in connection with SARS-CoV-2.

The concept of “precaution” must not only refer to the prevention of disease or death, but must also take into account other policy dimensions. If a state produces immense economic damage (including a shrinking of the wage bill) through a drastic lockdown and deprives a substantial part of the population of its livelihood, then it may have prevented pandemic diseases or deaths, but it has not “taken precautions”.

The same applies to states that have gone into massive debt in order to avoid the other two losses – medical and economic. They unload the costs of avoiding disadvantages in the present on future generations, who will have to repay these debts. In terms of intergenerational justice, both the number of deaths and the economic situation and the dimension of the national debt are relevant.

A (fictitious) state that has acted preventively in the sense understood here would do well in all three dimensions: the disease does not break out in the first place, and consequently there is no economic slump and no increase in public debt to artificially buy economic growth in the short term. If we humans eradicate an infectious disease (or the pathogen that causes it), then future generations will have neither deaths or illnesses, nor economic slumps due to a lockdown (which was necessary in 2020 to prevent deaths/illness), nor massive new debt (which was necessary in 2020 to cushion the economic slump).

This is precisely the case with the eradication of smallpox, and it has been incredibly beneficial to humanity. The damage that has not occurred on all three dimensions (which we would have if we as humans had to continue living with smallpox) is unfortunately not visible and therefore not in our consciousness, though.

SARS-CoV-2, the seventh of the coronaviruses harmful to humans, will certainly not be the last. And it is highly likely that there will be new influenza viruses, including some that are very dangerous for us. How can we avoid pandemics in the future without stalling the economy and without piling up a mountain of debt?

This is where the importance of vaccination is enormous and where both vaccine preparedness (i.e. the individual) and the availability of good and free vaccines (i.e. policy) play a role.

Vaccination is not easy, but it is the only sustainable way to permanently remove many highly infectious pathogens from the list of problems that future generations will have to deal with.

We, all people around the world, should remember and celebrate 8 May every year. On that day in 1980, an official multilingual document was ratified by WHO members, which declared smallpox eradicated. If we are all aware of the significance of this day, if every school child knows it by heart, then we will be in the right frame of mind to protect future generations from terrible epidemics.

Photo by the Centers for Disease Control and Prevention (CDC) on Unsplash: https://unsplash.com/@cdc