With the majority of people in the UK still spending most of their time at home on account of the COVID-19 pandemic, open spaces have become more important as places where they can relax and enjoy some fresh air. However, as David Kingman explains, new ONS data suggest there are very big inequalities in the amount of open space which young people have access to 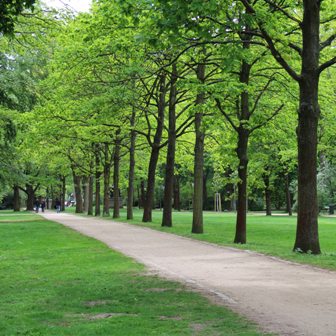 Earlier on in the COVID-19 pandemic, IF drew attention to how the lockdown is likely to be significantly harder to endure for certain social groups than others because of inequalities in the amount of living space which they have access to.

As you would expect given the UK’s housing crisis, inequalities in living space are especially pronounced with regard to age. Using data from the English Housing Survey (a government-run survey which investigates housing conditions in England by inspecting a representative sample of around 13,000 households), we were able to estimate that half of all households in England where the Household Reference Person (HRP) is aged 16 to 29 have less than 29.9 square metres of living space per person, whereas households where the HRP is aged 65 or over have almost twice as much (57.3 square metres per person).

At the time, we also acknowledged that “this may even be underestimating the scale of the difference, given that these figures only include indoor living space; the difference would probably be even greater if we factored in people’s gardens, given that larger properties are more likely to have big gardens than smaller properties.”

Since we wrote that article, the ONS has released a new piece of analysis which can help to shed some more light on exactly this question. This is useful because, while we already knew that there are big inequalities in access to indoor living space, it will help us to understand more about the different impacts which the lockdown is likely to be having on different social groups if can also take account of inequalities in the amount of outdoor space that they can use.

The new ONS analysis pulled together data from several different sources – including the Ordnance Survey and an annual survey which Natural England undertakes to investigate how people engage with the natural world – in order to look at the issue of access to open space in detail.

The good news is that they found that the vast majority of the population appear to have access to some type of green open space, whether that’s a private garden or a public park. Only one in eight households has no garden space at all, and access to public green open space is also widespread: more than a quarter of people (28%) in Great Britain live within a five-minute walk (300m as the crow flies) of a public park, while 72% live fewer than 15 minutes away (900m).

This rises to 52% and 95% respectively when playing fields are included alongside parks – although the Ordnance Survey data which they used to undertake this analysis cannot distinguish between public and private land, so it’s unclear how many of the nation’s playing fields are genuinely accessible to the public.

Even more encouragingly, it also appears that the types of people who are least likely to have access to a private garden are more likely than average to have access to a nearby public park: “Parks are most accessible in the poorest areas, with people in the most deprived neighbourhoods of England around twice as likely as those in the least deprived to be within five minutes’ walk of a public park (34% compared with 18%). Including playing fields, this rises to 57% compared with 42%.”

The grass is always greener

However, the bad news was that, as you’d expect, there are still very large inequalities in the amount of green space which different groups have access to, and the existence of a relatively generous amount of public green open space in many parts of the UK only goes part of the way towards attenuating them.

While the Natural England survey dataset doesn’t provide a detailed breakdown by age group, it does suggest that older people are more likely to have access to a private garden than younger people are: just 8% of people aged 65 years and over are without access to any kind of private outdoor space.

What it does say is that people who live in London and other big cities, and people who are Black and Minority Ethnic (BME), are groups which are significantly less likely than average to have access to a private garden. Given that the demographic profile of both of these groups is significantly younger than for the population as a whole, it seems safe to assume that this is also evidence that the young have less access to gardens than older people do.

The ONS found that just over one in five households in London don’t have access to a private garden (21%), and this is also true of 37% of people nationally who describe their ethnicity as Black. In addition to being less likely to have a garden at all, gardens in London are also smaller on average than those in other parts of the country: the median garden size for a house in London is 140 square metres (just over half the size of a tennis court), compared with 188 square metres across Great Britain as a whole.

As mentioned above, public open spaces clearly do go some of the way towards making up for certain disadvantaged groups being less likely to have private gardens of their own. However, there are a few reasons to doubt that parks and other public green spaces are a perfect substitute for having a private garden while the UK has been in lockdown.

Firstly, parks in big cities like London are shared by lots of neighbouring households; the ONS observed that “the average park in Great Britain serves just under 2,000 people, although some parks in densely populated areas cater for many more. Around 46,000 people have Clapham Common as their nearest park, more than 20 times the average.”  While having access to a public park is clearly better than nothing, there is obviously the world of difference between having a private green space to call your own and having to share one with thousands of other people, not to mention that some people may be deterred from using public parks because of concerns about being victims of harassment and other forms of crime.

Secondly, some green open spaces have been closed for periods during the lockdown, because of fears about people using them in a way which was incompatible with effective social distancing. For those for whom a public park was their only source of open space, this may have significantly affected their quality of life.

In our first piece of research that looked at living space during the lockdown, we estimated that there are currently around 1.73 million children in England living in homes which are officially deemed to be overcrowded. Given what we know about the overlap between living in an overcrowded household, economic deprivation and having access to a private garden, it is highly likely that most of these children are reliant upon public green open spaces to be able to get away from what could be a challenging living environment at home.

Although the lockdown is gradually starting to lift in England, the government officially remains committed to reinstating it if the COVID-19 infection rate reaches too high a level again. If that is the case, then the evidence that we have about which social groups don’t have access to private gardens should be considered when decisions about closing down public green open spaces again are being taken.