The draconian social-distancing rules which are now in the place in the UK are forcing people to remain indoors most of the time, a restriction which is likely to be much harder to bear for young families living in overcrowded conditions, argues David Kingman

At first glance, it could seem as though almost every household in the UK is currently going through a remarkably similar experience.

Regardless of what they would normally choose to do with their time, for the moment nearly everyone in the country is being forced to spend all of their days living within the same four walls, with only the other people who they are either fortunate, or possibly unfortunate, enough to share their home with for company. Whether you are young or old, rich or poor, the government-imposed restrictions on personal liberty are to all intents and purposes the same.

Yet while it may appear superficially as though we are all being affected to the same extent by COVID-19, if you look at what’s happening from a different angle then you can observe that the COVID-19 crisis has actually brought the UK’s existing economic and intergenerational inequalities into sharper relief than normal, as well possibly helping to exacerbate them.

Already, research has indicated that lower-earners are at much higher risk of being unable to do their normal job during this crisis than higher-earners are.

However, possibly the starkest indication of how the impacts of this crisis are not affecting different social groups in the same way can be shown just by looking at the simple issue of living space. Being forced to spend all day at home may be quite easy if you have plenty of space; but for people whose living conditions are cramped, it’s probably a much less appealing prospect.

As IF has highlighted before, living space is distributed extremely unequally in the UK, particularly between people who belong to different generations.

We published a research report earlier this year, Rabbit Hutch Homes: The growth of micro-homes, which demonstrated that the number of new-build homes that were less than 37 square metres in size has risen almost fivefold in the last five years in the UK, to over 9,500 per year. We argued that there are serious problems with allowing new-build homes which are this small to be built, given the existence of research which suggests that living in such cramped conditions is likely to have a negative impact on people’s mental health and wellbeing. 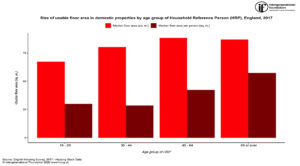 However, these new-build homes are only one aspect of cramped housing in the UK: if you look at the entire housing stock, households which contain younger people are significantly more likely to have less space than those containing older ones are.

The first column in Fig.1 displays the median amount of usable living space in households in England by the age group of the Household Reference Person (HRP) in square metres, based on estimates derived from the 2017 English Housing Survey Housing Stock Dataset (a social survey which provides data on a nationally representative sample of around 13,000 English homes).

Instead of just looking at the total amount of usable living space which households of different ages have at their disposal, it might give us a better idea of what it’s actually like to live in each of these households if we look at the amount of space they have per person. This controls for the impact of household size, because it stands to reason that living alone in a smaller property could feel more spacious than living in a bigger one if you have to share it with a large group of people.

The second column in Fig. 1 displays the amount of living space in these households divided by the total number of people who live in them, to create a measure of living space per person. Unsurprisingly, this is lower than the first figure for households in all age groups because the majority of households contain at least two people; however, younger households still have by far the least, probably because they are more likely to be either living in a home they share with other young people or to have children of their own living with them.

This may even be underestimating the scale of the difference, given that these figures only include indoor living space; the difference would probably be even greater if we factored in people’s gardens, given that larger properties are more likely to have big gardens than smaller properties.

Measuring the raw amount of space that different types of household have available to them is one way of looking at the issue of overcrowding. However, the government’s official measure of overcrowding, the “bedroom standard”, approaches the issue in a slightly different way.

The bedroom standard revolves around calculating how many bedrooms a household is considered to need according to the following set of criteria:

“A standard number of bedrooms is calculated for each household in accordance with its age/sex/marital status composition and the relationship of the members to one another. A separate bedroom is allowed for each married or cohabiting couple, any other person aged 21 or over, each pair of adolescents aged 10–20 of the same sex, and each pair of children under 10. Any unpaired person aged 10–20 is notionally paired, if possible, with a child under 10 of the same sex, or, if that is not possible, he or she is counted as requiring a separate bedroom, as is any unpaired child under 10.” 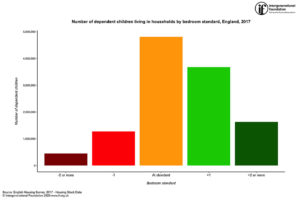 Fig. 2 shows the estimated number of children who are living in English households, broken down by the household’s bedroom standard. Clearly, the majority of children live in households which are either at the bedroom standard for their household or which are under-occupying, but around 1.73 million children are estimated to live in homes in England which have fewer bedrooms than they need for their household to live comfortably – i.e. they are overcrowded.

These inequalities in access to living space existed before COVID-19 and they will persist after it. Highlighting them is useful for a couple of reasons.

Firstly, it draws attention to the fact that, while most of the debate about the UK’s housing crisis has focused on the cost of housing, the quality of housing is also important. People who are either renting or trying to get on the housing ladder today are not only going to be paying a much larger share of their income to afford housing than was the case in the 1970s and 1980s, they are also likely to get significantly less actual living space in return for their money.

By contrast, older homeowners who managed to get on the property ladder when housing was much more affordable have ended up with much more living space on average, even though they are likely to live in smaller households.

Secondly, highlighting that many younger households don’t have access to an adequate amount of living space should also help to inform the debate about restricting access to public spaces during the COVID-19 epidemic.

While policymakers should be guided by the best scientific evidence when it comes to deciding how to combat COVID-19, it’s worth pointing out that policies such as banning outdoor exercise or closing public parks do have negative repercussions for the nation’s physical and mental health too, which are likely to fall most heavily on the households which live in the most cramped conditions and who don’t have access to green spaces of their own.