A coalition of powerful voices in the global scientific and research community is arguing that policy-makers need to pay more attention to the health of today’s children around the world, in order to ensure that they are able to lead healthy, fulfilling lives. David Kingman reports 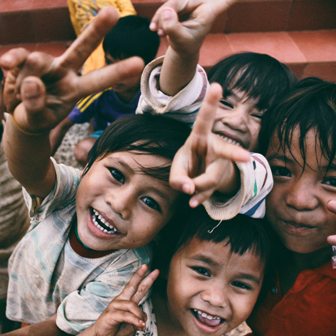 Here is an interesting question: what is the leading cause of death for children and young people aged between 5 and 29 around the world?

Surprisingly, perhaps, it isn’t one of the more obvious candidates which tend to receive the largest amount of coverage in the Western media, such as war, crime, famine, HIV/AIDS or suicide. According to the World Health Organization (WHO) it’s actually road traffic accidents, which collectively kill 1.3 million people per year, and injure another 50 million (half of whom are pedestrians).

The tragic thing about this statistic is that virtually all deaths and serious injuries caused by road traffic accidents are now seen as being preventable, as long as the right regulations and government policies are put in place to make the roads as safe as they can possibly be.

Driving for a better future

The Vision Zero initiative – which was introduced in Switzerland in 1997 – aims to improve road safety to the point where there are no longer any deaths or serious injuries caused by traffic, and the city of Helsinki in Finland became one of the first places in the world to actually achieve it in 2019.

A similar concern about the need to protect the health of children and young people, both today and tomorrow, is what underpins a new initiative to improve child health around the world, which the WHO has recently launched alongside a coalition of influential partner organisations.

The first report by the WHO-UNICEF-Lancet Commission, called A Future for the World’s Children, which launched in February, underlines quite how large is the scale of the challenge facing today’s global health policy-makers.

How is the world doing on child health?

The WHO-UNICEF-Lancet commission – which consists of 40 experts in child health from around the world, and is chaired by the former Prime Minister of New Zealand, Helen Clark – argued in its first report that currently no country anywhere in the world is taking sufficient measures to protect the health of younger and future generations. Helen Clark said:

“Despite improvements in child and adolescent health over the past 20 years, progress has stalled, and is set to reverse… It has been estimated that around 250 million children under five years old in low- and middle-income countries are at risk of not reaching their developmental potential, based on proxy measures of stunting and poverty.

“But of even greater concern, every child worldwide now faces existential threats from climate change and commercial pressures. Countries need to overhaul their approach to child and adolescent health, to ensure that we not only look after our children today but protect the world they will inherit in the future.”

Which threats to child health are they worried about?

The WHO-UNICEF-Lancet commission particularly highlighted three main groups of potential threats to the health of younger and future generations around the world.

Firstly, they are concerned about what might be considered “traditional” indicators of socio-economic disadvantage which have a negative impact on the world’s children, such as hunger, disease, lack of access to education and premature mortality; these are the kind of threats to children and young people’s health referred to by Helen Clark in her statement above.

Secondly, they are also very concerned about the potential impacts of climate change upon the health of children and young people, especially the disproportionate negative impacts which it is forecast to have on people living in poorer countries through worsening extreme weather events, prolonging droughts and heatwaves, and turning people who are displaced when parts of the developing world become inhospitable into refugees.

Thirdly, they have also particularly drawn attention to one other specific type of threat, which is the danger posed to children’s and young people’s health by what they deem to be predatory advertising practices being used by major brands, which try to encourage children and young people to make unhealthy lifestyle choices.

This threat relates to the high prevalence of lifestyle-related health problems among children and young adults such as obesity and smoking in many countries around the world, which the commission believes governments need to do more to get to grips with.

One example given in their report is that 24 million young people in the USA are believed to have been exposed over the past two years to advertising which promotes vaping, the ultimate goal of which is to inculcate harmful nicotine dependence among a new generation of potential consumers.

Interestingly, their report argued that there are virtually no countries in the world today which are successfully protecting the health of younger and future generations from all three of these types of threat. While developed countries tend to do very well on the first set of issues (because they have low infant mortality, good access to education and so on), developed countries are all doing much worse than developing countries in protecting younger and future generations from the negative impacts of climate change (because they have much larger carbon footprints).

Also, there doesn’t seem to be anywhere which is doing a particularly good job of protecting children and young people from predatory advertising, as this was highlighted as a problem for both the developed and developing world.

What can we do to improve child health?

Although the evidence which the WHO-UNICEF-Lancet commission has assembled paints a rather bleak picture of the future direction of travel for child health around the world, the report’s authors have proposed a set of policy measures which they think could help to improve this situation.

These are listed below:

While this set of policy proposals is quite light on detail, the report itself couches most of its arguments in the language of achieving the 17 UN Sustainable Development Goals, which would provide a formal mechanism for assessing and benchmarking the progress that different countries are achieving towards improving children’s and young people’s health.

The voice of children

Of these five proposals, it could be argued that No. 4 is the most original one. It draws attention to the way that young people often aren’t invited to make any contributions to government policies that affect children and young people.

The emergence of Greta Thunberg, a 17-year-old schoolgirl from Sweden, as a global icon in the fight against climate change highlights the fact that young people are perfectly capable of articulating their own priorities when it comes to achieving sustainable development. So it would be interesting to see how more young people can be encouraged to become activists in other issues which will have a lasting impact on the health and wellbeing of this generation.