“OK Boomer”, a simple retort against the Baby Boomer generation, is now more than an internet phenomenon. With the phrase garnering an ever-growing presence among Generation Z, IF placement Cameron Leitch investigates how the phrase has developed and what its popularity says about current intergenerational attitudes 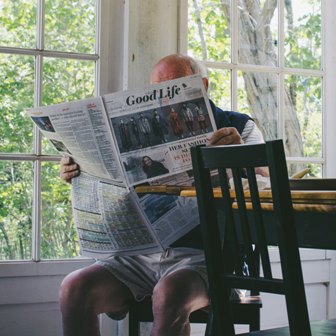 The origins of the expression “OK Boomer” are held within various remixed TikTok videos, where an old man is seen accusing the younger generations (Millennials and Generation Z) of exhibiting a “Peter Pan syndrome” – of being people who “do not want to grow up”.

Numerous young people have split-screened the video and can be seen holding up notepads with “OK Boomer” written across them. Since then, the phrase has developed into a catch-all phrase which has been used by young people in response to condescending comments made the older generations.

“OK Boomer” is more than just a meme

The popularity of the phrase is exemplified by its usage outside of pages devoted to memes. Now social media is not the only source where you’ll see the much-used phrase. People are printing the message on various items of merchandise – which seem to be in demand. One young person, Shannon O’Connor, has apparently made $25,000 by selling vast volumes of T-Shirts and hoodies bearing this printed message.

Importantly, we have also recently seen the first use of the phrase at a political level. Chlöe Swarbrick, a 25-year-old MP in New Zealand, used the phrase in response to an interruption by the older, opposition spokesman for climate change, Todd Muller, when giving a speech on the Zero Carbon bill.

The ability of the phrase to penetrate political discourse illustrates the social impact that the phrase is having, but also reemphasises that the retort aptly sums up the younger generation’s dissatisfaction towards the older generation, even when that young person is a politician acting in an official capacity.

Which generations are we referring to and what have they experienced?

The Baby Boomer generation – the main targets of the “OK Boomer” phrase – constitute people who were born between the years 1946 and 1964. This cohort has been on the favourable side of a rise in intergenerational inequality in recent decades – at least within the United Kingdom – where great wins in housing and pension policy have meant that wealth has disproportionately been distributed towards the older generations.

Generation Z, on the other hand, represents anyone who (according to some definitions) was born between the years 1994 and 2010, and so would be anywhere between the ages of 9 and 25 respectively. This generation have been the unfortunate victims of the rise in intergenerational inequality. Those who belong to Generation Z will experience – or are in the process of experiencing – massive student debts, an inflated housing market way out of financial reach, and a climate change emergency which is threatening the planet’s existence.

Young people have had enough

Young people are fed up. Those who use the “OK Boomer” phrase believe that those in power – who tend to belong to the older generations – do not seriously consider issues which hold great importance to younger generations, such as climate change, student debt and housing. Even worse, when those younger generations go out of their way to raise awareness of these issues, whether in a civic or political forum, they often receive condescending and/or patronising responses.

These events have led to the development of the view, among users of the phrase, not only that older generations do not understand the present-day difficulties which the younger generations experience, but also that trying to enlighten them through discussion will be fruitless. Consequently, they have resorted to the phrase “OK Boomer”.

The end of friendly intergenerational relations?

The rise in the use of “OK Boomer” has led some to believe that this is the end for friendly intergenerational relations, and with the insult “snowflake” – implying that the young are easily offended – in popular use among the older generation, the current rhetoric between generations is not exactly pleasant.

However, instead of trading jibes and allowing communication to break down, interests would be better served if Generation Z and the Baby Boomers could work in collaboration to continually place pressure on those in charge to address intergenerational equality.

With intergenerational inequality now increasingly visible and in need of solutions, now is not the time for generations to turn on one another and insult each other. We already experience too many divisions within society for there to be more.