There can be no bigger issue of intergenerational justice than preserving the planet for future generations. But Angus Hanton, Co-founder of IF, admires the persuasive restraint of Extinction Rebellion

The High Court decided at the start of November 2019 that the Metropolitan Police’s blanket ban on Extinction Rebellion (XR) protests in London in October was illegal.

This has boosted the hopes of XR protestors that they can do more than just get into the news: their central demand is that the UK should go carbon-neutral much sooner than planned for the sake of future generations – 2025 instead of 2050. Five years instead of thirty.

The Extinction Rebellion protest is an interesting phenomenon because it’s been so widely supported: many public figures have shown solidarity with the XR movement, including the Prime Minister’s father, Stanley.

The tactics of Extinction Rebellion protestors have been fascinating and they are intergenerational in the narrow sense that they have included protestors of all ages including many older people, although the protests are clearly being led by the young.

One major tactic is the use of sheer numbers of people willing to break the law in a peaceful way – making it easier to cause disruption – but another is the deployment of politeness. One person told me their travel plans were disrupted but they were won over by an XR protestor who was very apologetic and polite in making a way through for her. 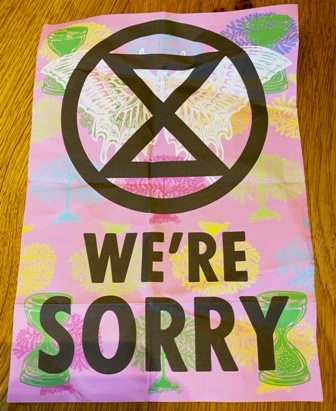 Another strategy the rebels employ is having lots of “de-escalators”: their job is to ensure that none of the protestors acts in ways that are dangerous or threatening. The de-escalators are dressed in white and they swoop in when things get heated and try to avoid any violence if at all possible.

Non-violent protest has a distinguished history, from Gandhi’s creative protests which led to Indian independence, through to the sit-ins and marches in the 1960s in the United States to outlaw segregation. These political movements were couched in terms of fairness for younger and future generations.

Intergenerational fairness in the abstract is not something people are likely to take direct action to promote, but it is fairness for future generations which underlies all environmental movements – most people want to preserve the environment for the sake of their children and grandchildren, and humanity in general.