Angus Hanton, Co-founder of IF, reviews a book subtitled “How the Baby Boomers Stole the Millennials’ Economic Future” 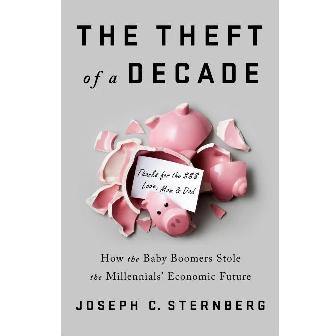 A hyper-articulate Millennial, Joseph Sternberg analyses the fate of young people since the “Great Recession” of 2009 and shows convincingly how badly they have fared in terms of jobs, savings, housing and collective liabilities.

The focus of the book is squarely on the US where the Great Recession pushed employment up to 10% by October 2009 and reduced demand for the sorts of jobs for which Millennials were suited. Sternberg argues that at every stage of the downturn and recovery the Baby Boomers made sure that their interests were protected, and they wrote themselves promises for pensions and social care. He doesn’t mince his words: “When it comes to the job market, or the educational ‘investment’ market, or the homeownership crisis, Millennials have been mugged in broad daylight.”

The terms in which this book puts the matter are theft: it’s about a transfer of resources to one cohort from another which was both conscious and intended – and it’s clearly the Baby Boomers who are in Sternberg’s firing line.

As you’d expect from a senior Wall Street Journal writer, Sternberg recognises that it’s not absolutely everyone in the older generation who has prospered, but he is also identifying the Baby Boomers as the leaders who made the spending and taxation choices which have robbed younger generations.

Of course the title is a play on words: the Millennials, those in their 20s and 30s, have had a decade stolen from them, but it is also the worst type of theft that’s occurred in the last decade.

British experience has been similar, though in some areas it’s been worse. The high tuition fees, which have long been a feature of the US university system, have been introduced into the UK, ironically by politicians in London who have themselves talked about intergenerational fairness.

The UK has also suffered worse house price inflation than the Americans and have experienced a bigger increase in government-guaranteed pension liabilities.

Joseph Sternberg lives in London and has been promoting his book in the UK, hoping that Europeans will learn from the US experience and will resist further unfairness between generations.

Concluding The Theft of a Decade with an epilogue entitled “Hiding in Plain Sight”, Sternberg points out that even though the facts are clear there are still some Millennials in denial – about not only their economic plight but even the fact that they are Millennials: older Millennials like the author (dob 1982) are now pushing 40, yet increasingly they don’t think of themselves as young people.

So, in looking for a way forward, Joseph Sternberg believes we can’t rely on the Baby Boomers (dob 1946–1964) who, he says, would be recognised in a police line-up. Rather, we have to look to the Millennials themselves: “it’s time to take our fate in our own hands.”

Actually both generations should perhaps start by taking this book into their our hands: £20 from Amazon.