China and Japan face unique intergenerational challenges – and represent divergent examples of a binary pattern that the rest of the ageing world might learn from. By Lauren A. Johnston*

In late June, world leaders convened in Japan for the 2019 G20 leaders’ summit. The discussion agenda included global economic governance, with trade in focus, and – for the first time for a G20 – demographics.

Home to the world’s most-aged population, no country faces a demographic crunch like Japan. Already more than a quarter of the population are aged over 64, with recent estimates suggesting that by 2050 that population share in Japan will have climbed to 38%. The population by then will also have declined, from today’s 127 million persons, by something like a quarter. So Japan is not only the land of the rising sun but now also of the declining population.

Others in the same boat

Japan, however, is not alone. The trend toward an increasing share of population over 64 is rising almost universally across countries, thanks to improved health and education opportunities having increased longevity and reduced fertility rates. The ramifications for society and the economy, statically and dynamically, are only just beginning to be understood and explored.

The fundamental risk in an era where the population pyramid is gradually, if not rapidly, turning on its head is that the newly-heavy “weight” of the old population share transforms the simple demographic notion of an “ageing population” into a much wider decline: that of an “ageing society” or an “ageing economy”. That is, a much wider “decline” across a whole economy and society, with compound adverse consequences for the next generations.

Fortunately, grappling with the desirable and undesirable – and avoidable and unavoidable – social and economic implications of population ageing is gaining increased political and researcher attention.

While it is indeed Japan that is the canary in the rich-world population ageing coal mine, it is China – 1980s China moreover – that is home to a concept that might ultimately shed timely and very useful light on the structure and dynamics of economic demography circumstance worldwide. That concept is known in English as “getting old before getting rich” – or, as the Chinese put it, “not rich, first old” (wei-fu-xian-lao).

The launch of the “reform and opening” economic and social modernisation agenda in China in 1978, by Deng Xiaoping, was soon followed, in 1980, by the introduction of a complementary family planning regime, the One Child Policy. In short, a falling birth rate would not only reduce the sheer number of hungry mouths, but also provide for a period of a high-workforce-share population. Their income and productivity could, in turn, be invested in China’s modernisation, and in parallel in the greater education of the next, smaller, generation.

In the mid-1980s, however, Wu Cangping, a Renmin University demographer, realised that there was no feasible projected economic growth rate that would enable China to become a rich country per capita before it became an “old” country, that is, one with a high elderly dependency ratio. Wu summarised his fears that ‘“premature” population ageing would derail China’s modernisation, and his ensuing research, around the concept of “not rich, first old”, which has captured the attention of Chinese academics and policy-makers working in related fields ever since.

Wu’s realisation that China would be “not rich, first old” has an implicit extension to all countries: if there are “poor-old” countries, then conceptually there are also “poor-young”, “rich-young” and “rich-old” countries. Together these form the Economic Demography Matrix (EDM). 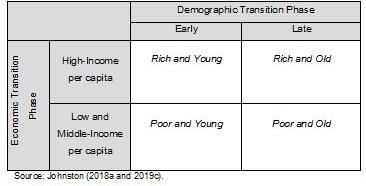 In general, an ageing population poses various economic challenges: rising labour scarcity; public and corporate resources increasingly redirected to the retired segment of the population and hence away from prime productivity-generating activities and population cohorts; alongside caring obligations placing similar requirements on working-age persons, including away from caring for and investing in future generations, among them.

In China’s case, for more than three decades policy-makers have been worried that facing such challenges as a “poor” country would inhibit, if not entirely prevent, China eventually becoming a “rich” country. With this concept helping Chinese policy-makers to understand the country’s “economic demography transition”, a set of policies were incrementally evolved so as to co-facilitate China’s sustainable long-run demographic and economic development accordingly.

Where a country like China is “poor-old”, other countries, including Japan and the UK, are “rich-old”. The timing of arrival of population ageing in the economic development process, and the relative speeds of each of the respective economic and demographic transitions in any given country, will in turn determine which corner of the EDM a country is situated in at any point in given time.

Importantly, this will also influence how population ageing itself affects the economy and society. Here, two ways that the timing of arrival of population in the economic development cycle – late or early – might be changing how each of Japan and China are being quite differently affected by population ageing are explored.

Looking beyond headline data on the share of “old” reveals important differences between Japan and China’s ageing circumstances.

In Japan’s case the older cohort has dominated the economic agenda through their adulthood and has largely driven the asset accumulation and price-setting process, technological and social innovation, consumption, and hence also the political agenda (they are the dominant voting block).

Moreover, they did so over decades when Japan, by definition, was working-age-population-share rich and thus enjoyed higher demographic dividend-related growth. The same cohort has also disproportionately enjoyed the stability and predictability of lifelong employment contracts, and fixed, final-salary-related pensions.

In contrast, in Japan, the generation that came of employment age in the later 1990s and thereafter have been far less fortunate. And yet, it is now that less fortunate generation, in their relatively less lucrative and stable prime earning years, that is being expected to fund the generous retirement offerings promised to the older, better-off, retired cohort.

In China, in simple terms, the generational balance of power is reversed. This is explained not only by China having been per capita income poor during most of the older cohort’s working lives, but also they missed out on the many unique attributes of China’s reform era.

In addition, and in contrast to Japan, the retirement of the older cohort in China’s case has different human capital implications. The older cohort, for example, is comprised of workers who were lucky if they had a chance to complete primary school, let alone high school. The younger cohort, by comparison, has enjoyed the fruits of both rising national and household income, and also the rapid fall in children per household: hence, education in China is heavily biased in favour of the young.

That historical reality leaves the smaller younger cohort relatively well-placed to generate a sufficient and new level of productivity to provide for the retiring masses.

In Japan, however, the older cohort comprise a much more significant share of the nation’s human capital – perhaps disproportionate even to their population share owing to their relatively durable, potentially even pipeline-blocking, employment opportunities – and their loss from the workforce hence reflects a greater loss.

And yet, it is Japan’s young, in contrast to China’s newly-endowed young, who must fund high-income-country benefits for their elders. Fearful that the cost of generous pensions would inhibit China’s modernisation, China’s leaders have been very modest in their pension promises. The post-War era in Japan, less so. The relative weight of carrying the old in Japan might itself inhibit growth – just as China has always feared of “not rich, first old”.

Although China’s growth has slowed from its earlier double-digit trajectory, growth nonetheless still hovers around 5-6% per annum. In Japan by contrast, growth has stagnated for two decades, and only in more recent years has climbed into the range of 0-2% per annum.

China in other words, while still needing to grow to reach the frontier, in growing relatively quickly, is also better positioned to have resources left over as ageing-related costs, from healthcare to pensions, pile up.

In economics, economic demography lumps have historically been associated with a large youth share inducing a Malthusian stagnation or a large working-age population offering a “demographic dividend”. The year 2018, however, marked the first year ever that the world was home to more persons aged over 64 than under 5; some 85% of global GDP is now produced in countries that are newly home to rapidly ageing populations. Hence, understanding just how population ageing is differently affecting economies and societies is now of remarkable importance to deriving the optimal policy response.

As G20 leaders return home from their from their summit, they would do well to understand that, in “poor-old” China’s case, population ageing broadly means working out how to sustainably allocate a fair share of resources to the older, often retired-poor, cohort while navigating the political economy of enabling the smaller, relatively educated younger cohort to engineer a newly innovative and prosperous China.

In Japan meantime, the government is relatively beholden to lifespan-fortunate older voters and hence is nervously seeking to uncover discreet ways to better support its disenfranchised younger cohorts.

It is the latter who must somehow become the superheroes of productivity such that they can support the world’s most aged society while also retaining its earlier innovative character. And yet, despite that fact and in something of an ageing society-inducing vicious circle, it is they who have, at least till now, received less support from the government and society at large.

Amid such a newly complex global economic demography and political economy, sharing lessons across and between “poor-old” and “rich-old” economies alike may help to make the population ageing process more intergenerationally sustainable in the case of each. Most importantly, it may also help to ensure that ageing populations don’t themselves induce ageing societies – something that Chinese policy-makers at least have been seeking to avoid in a context of development since the mid-1980s, thanks to the idea of “not rich, first old”.

* Lauren A. Johnston is Founder and Director of New South Economics (a consultancy specialising in research and advisory on China, Africa, China-Africa and global trends), holds a PhD in Economics from Peking University and, until recently, was Senior Research Associate at the Mercator Institute for China Studies (Merics) in Berlin.