Vice-chancellor pay is in the news again. Liz Emerson, IF Co-founder, investigates the latest research from the University College Union (UCU) on the flagrant disregard of calls for greater propriety over pay 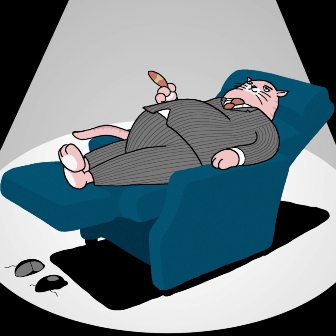 Vice-chancellors (VCs) are under scrutiny again less than one year after the last VC pay and pensions scandal.

Then, VCs were called out for rewarding themselves outrageous salaries and other perks in a feeding frenzy that started with the tripling of student fees in 2012. This time, it seems that they just cannot stay out of meetings in which their pay, benefits and pensions are discussed, even though a committee of university chairs has issued guidelines from as far back as 2015 that they do just that.

Last year’s scandal can be encapsulated in the story of the former VC of BathSpa University, Professor Christina Slade, who left her job with a pay, benefits and pensions package totalling a whopping £808,000. Her package also included a £20,000 “housing allowance” and £20,000 for “other benefits-in-kind” as well as a £89,000 “pension contribution”.

She was not alone. Bath University was also exposed for paying VC Glynis Breakwell £460,000 a year, and led to student protests demanding her resignation.

VC pay has “far outstripped that of their peers in senior leadership roles elsewhere”, well above that of Chief Executives at NHS Trusts and local authorities, and it seems more than coincidental that its upwards trajectory mirrors the sudden rise in student fees. VCs have been literally feeding off the student debt of the young.

How bad is it?

The University College Union (UCU) has just published their findings from Freedom of Information (FOI) requests that reveal that – in spite of calls to improve transparency around senior pay – four-fifths of institutions (81%) still allowed their VCs to attend meetings where their pay was set last year, and only a third (32%) provided full minutes of the meetings.

Twenty-one universities refused to respond to the FOI. Of the 135 universities that responded to the FOI requests, 109 allowed their VC to attend the meeting, and nine of them even had VCs sitting in the committee.

The fact that 52 institutions refused to send any minutes and 34 sent in redacted minutes, speaks volumes of the blatant disregard institutions have for accountability. 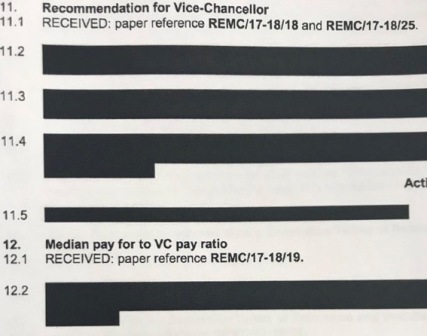 Students have had to suffer a tripling of student fees, the removal of grants for the poorest students, little protection against corporate landlordism, and sky-high interest rates. Young academics are locked out of full-time job security and the employment protections that go with it. Yet, it seems that VCs and their misguided advisors are now trying to hide their own profligacy.

In 2018, after the last pay scandal, the Education Select Committee report on higher education stated:

The newly established Office for Students (OFS), published requirements back in June 2018 that university leaders “will have to justify their pay”. A year later and it seems that too little progress has been made improving transparency and accountability by the supposed regulator of the sector which has led to further criticism of the OFS as “toothless”.

The message has still not got through. The higher education sector is still refusing to act. We need to call out the profligacy of sector leaders, and their attempts to cover their tracks.

We will be writing to:

And calling on their students and student leaders to demand better governance and a halt to any attempt to turn VC pay into the equivalent of a football transfer market.