Liz Emerson, IF Co-founder, responds to the recently-published Augar Review of Post-18 Education and Funding, and concludes that, in spite of many positive recommendations, students will still be dealt a poor hand 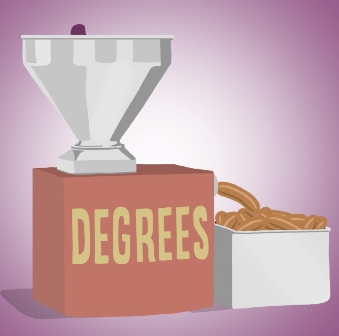 The Augar Review report of post-18 Education and Funding was supposed to be Prime Minister Theresa May’s out-going legacy. Sadly, it seems that many of the recommendations made, while sensible and forward-thinking on the one hand, will not help students and graduates in the long term.

All the panel members have skin in the game.

They have either served for governments, worked on quangos, are leaders in higher and further education, or been paid by higher and further education establishments. Two are either Vice Chancellors or ex-Vice Chancellors. Even Philip Augar, Chair of the Review, was a non-executive board member for the Department for Education from 2004 to 2010 when the current system was being designed.

Experts in their fields they may be, but are they really objective about the current financing of higher and further education?

The report makes it clear from the introduction that the panel members would not challenge the current income-contingent design. They are quick to state that “the alternative is simply inconceivable”.

Theresa May’s call for the need to “reduce the burden of debt on young people”, is swiftly undermined by a call for more graduates to repay their loans in full since “increasing the volume of tertiary education does not necessarily translate into social, economic and personal good”.

Much is made of promoting “a citizen’s ability to realise their full potential” and “the provision of a skilled workforce” for the benefit of the economy. The public benefit that comes from a society with a social contract that chooses to invest in, not charge for, the higher education of its younger citizens, is largely ignored.

The notion that society should bear more of the cost of creating more productive, more civically and politically engaged members of society, is also side-stepped.

That said, there are mild criticisms of the “market….that on its own it cannot deliver a full spectrum of social, economic and cultural benefits”.

Feeding off the young

The panel rightly calls out higher education institutions for the feeding frenzy that has taken place since the tripling of tuition fees to more than £9,000. There are reports  that some institutions are running surpluses of 33.9%. Thirteen providers are running surpluses of 10%, while others have borrowed so heavily for expansion projects that 32 are now in deficit.

The Office for Students has warned of over-ambitious forecasting of 10% growth in student numbers when the student population as a whole is likely to decline by 5% because of changing demographics.

The victim as ever is the student. For instance, accommodation blocks have been sold off to the private sector for an upfront cash injection in “sale and leaseback agreements”. Rents in 2018 were 6% higher than in the previous year, and average rents have increased 30% since the trebling of fees.

You don’t have to be a rocket scientist to see how higher student fees and loans, over-expansion by the sector, combined with investors sniffing healthy returns, have led to this.

But who is responsible for protecting the victim students? Not, it seems, institutions, nor the government. Will the newly-formed Office for Students step in and demonstrate that it is there to protect students? Let’s not hold our breath.

Nor could the panel find any justification for the 10% unit cost set aside per student and accounted for “by the margin of sustainability and investment” (MSI) which diverts £1,000 per student into institutional pockets.

A glaring omission by the panel however – another example of how students are being exploited – is the panel’s complete disregard concerning Vice Chancellors’ self-enrichment through massive pay and pension hikes over the past seven years. It is simply not good enough that VC panel members chose to “recuse themselves” in order to dodge the difficult questions that should have been asked of their fellow senior leaders.

You would be forgiven for thinking that a drop in student fees to £7,500 is a victory for students. Yes, the reduction in fees is welcome, but do remember that when David Willetts first introduced the system back in 2012, only the most “prestigious” institutions were supposed to charge the full £9,000. Most institutions were expected to charge between £6,000 and £7,500 per student per year. Much to his embarrassment nearly all institutions jumped to the £9,000 limit immediately.

So, a reduction in fee levels is welcomed, but the new fee level will still be over double what students had to pay under the previous Plan 1 student loan system.

A more welcome intervention came with the announcement that the interest rate charged should be dropped from RPI+3% to just RPI. IF has campaigned vigorously for this change. We see no reason why students should be charged rates of interest that are treble what other generations are able to borrow for, for example, nursing care.

We would still question whether the interest rate should be RPI as opposed to CPI, since RPI has been discredited as a measure of inflation by the government’s own Office for National Statistics.

The sting in the tail – thresholds and 40 years

The panel give in one hand and take more for an extra 10 years with the other. Here’s why.

Graduates only start to repay their loans when they hit an annual income threshold. Initially set at £21,000 back in 2012, the threshold would kick in and take 9% of annual earnings from a graduate’s pay pack for the next 30 years.

In spite of assurances to the National Union of Students and others that they would not change the threshold of repayment with the trebling of fees, the then Coalition government broke their promise and froze the level of repayment, when they asked higher education wonks how to draw more students into repayment. It meant that more low earners were dragged into repayment sooner.

Today, the threshold is currently £25,000 and lasts until the loan and interest is paid off or for 30 years, at which point it is written off.

The recommendations by this panel are to reduce the repayment threshold again in order to drag more low earners into earlier repayment, their argument being that repayments should commence at the same level as non-graduate median earnings, which currently stand at £23,000 per annum.

Now for the sting in the tail. The authors have cynically calculated that people in their 50s earn more than those in their 20s, so the length of repayment is now recommended to be 40 years.

What does that mean for tax rates? An average graduate will have a marginal tax rate of 41% for the next 40 years of their life: 20% income tax, 12% national insurance, and 9% student debt repayment. And that’s before the 5% auto-enrolment pension contribution that all employees are now expected to pay.

And here is the weakness of the entire report. The review has sat in a departmental silo, with no appreciation or awareness of the other financial pressures younger generations face today, such as high housing costs and the stagnation of incomes.

We know that younger generations are not expected to have the same standards of living as previous generations, and the proposed changes in the system do nothing to help.

Now for some good news.

The panel recommends that there is a cap on graduate repayments in order to avoid overpayments. It means that future graduates will not face extortionate interest rates of RPI+3% when studying and RPI plus up to 3% for 30 years (as under the current system). Instead, once graduates have repaid 1.2 times the loan and interest borrowed, their student loan will be written off.

A return to maintenance grants for the most disadvantaged students is to be welcomed, as is the acknowledgement that threaholds for maintenance loans have not changed for ten years and need uprating.

But, as their research makes plain, means-testing means that many students from slightly better-off families are not receiving enough financial support from their families, who have to fill the gap in finances, and many of whom simply do not have the spare cash to set aside to support their children adequately through university.

Only 15% of children from wealthier families receive the same amount as a full maintenance loan.

There is near-universal agreement that the “polarisation” in educational attainment has to stop. Further education has been starved of funding and unfairly treated by policy-makers over the past 20 years by different governments, and the proposals to change the funding design so that they share a more level playing field with HE providers is sensible and should be supported.

In the UK just 4% of 25 year-olds hold Level 4 or 5 qualifications equivalent to a Higher National Certificate (HNC). In Germany it is 20%.

Overall spending on 16–18 year-olds in further education fell by 15% in real terms between 2009/10 and 2017/18, and spending per learner fell by 12% between 2011/12 and 2017/18. The reasons for the collapse are complex but with 6 million people in the UK without a Level 2 qualification it is clear that improving skillsets for the technological shocks to come from automation should be a priority.

England’s four new National Colleges intended to develop excellence in specific areas are therefore to be applauded. The forthcoming 12 Institutes of Technology should also be celebrated. The academic snobbery around obtaining a degree over a technical qualification must be addressed, especially now that 34% of graduates in England and Northern Ireland are in non-graduate jobs.

In fact, as the report states, “the UK is an outlier internationally in terms of the proportion of graduates in non-graduate jobs”: more than any European country except for Ireland or the Czech Republic.

And this is where the exciting recommendation to create a Lifetime Learning Allowance, that helps people to retrain, comes in.

The complex system of “Equivalent or Lower Qualification” (ELQ) rules currently in place effectively prevent anyone from receiving direct financial support for any higher education qualification at a level at which they have already studied.

In the new world of 100-year lives, and younger generations having to work into their 80s, such outdated policies must be abandoned. We will need to encourage people to retrain at different stages of their lives.

A young mother or father who might have a degree in law may prefer to retrain in order to have a better work/life balance with young children, or to be able to support their ageing parents. At present, the system makes it difficult to retrain and the recommendations in the report calling for “flexible training”, “modular learning” and a “lifetime loan entitlement” all appear to be sensible. If Australia, New Zealand and Singapore can do it already, why can’t we?

Since fee levels can only change with parliamentary approval, and with the House in a state of paralysis thanks to Brexit and in-party leadership contests and bickering, there is little hope that the current fee levels are going to change in the short term.

More worrying would be for the other elements to be taken forward under “secondary legislation”. That could mean extending the loan term without changing fees, while maintaining high interest rates.

But politicians beware: parents and students are wising up to the poor deal today, and any General Election is likely to find student debt high up on the political agenda.