Knife crime cannot be written off a merely a symptom of gang culture, writes Sylvie Markes: it reflects a deeper and broader societal malaise which austerity cuts have exacerbated. But government policy can make a difference 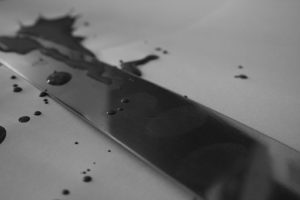 In April of this year, a shocking statistic revealed that London’s murder rate exceeded that of New York in 2018. What followed was a series of broadsheet and online articles that attempted to draw links between a rise in knife crime and government cuts to youth services.

Now once again the horror stories are appearing on the front pages of our newspapers. And yet there is no sustained or broader assessment of why these crimes occur. It seems as if there is little imperative for mainstream media to conduct a serious investigation into the relationship between cuts and a rise in this particular kind of violence.

The current reporting of these crimes largely ignores the way young people involved in knife crime have been failed by the system. “Gang culture” is used as a catch-all phrase designed to limit questioning. Obviously people are responsible for their own actions and should be held accountable. However, most of the reporting dehumanises both the victim and the perpetrator, peddling a governmental agenda by ignoring the material reasons why young people are prepared to carry a knife in the first place.

Youth services include youth workers, youth clubs or even advice for young people. Advice might be offered, for example, in how to gain employment, find housing or gain qualifications. Youth workers and youth clubs provide a support network and an infrastructure for young people so that they feel included and valued within society. Without this infrastructure, especially vital for those from a low socio-economic background with less opportunity, is it much of a surprise that people feel excluded and at odds with society? According to both the World Health Organisation and the Centre for Crime and Justice Studies, violence is symptomatic of this feeling of exclusion and social inequality.

Describing “gang culture” as a cause of knife crime is not enough, uncovering only part of the story. For starters, the Metropolitan Police estimate that 75% of those found with a knife in London have no relation to gangs. We must also recognise that gangs fill a void when no other opportunities out of difficult circumstances are offered.

The trade union Unison has discovered that between April 2010 and April 2016 £387m was cut from youth service spending across the UK and this figure has only got worse in the past two years. From 2010 to 2016 the average London council had its youth service budget slashed by an average of 36%. Not being part of the statutory obligations of local authorities (unlike social care and the provision of school places, for example) youth services have consistently been among the things to suffer budget cuts when austerity measures bite. Young people with low or no income were always going to be hit the hardest as education maintenance grants were slashed, and families lost child tax credits, child benefit and housing benefits. As a result, social mobility is stunted and young people feel alienated.

The Institute for Fiscal Studies has projected that absolute child poverty will increase by around 4 percentage points between 2015/16 and 2021/22. Around three-quarters of that increase (about 400,000 children) is ascribable to benefit changes. In contrast, absolute poverty is expected to remain the same across the population, demonstrating the unequal treatment between age groups.

If people are a product of their environment, especially in childhood, then how can the Tory government accept no responsibility for the recent crime wave among young people? As Helen Hayes, the Labour MP for West Dulwich and Norwood, has said, “Causes of the appalling increase in knife and gun crime are complex and so are the solutions, but Tory cuts of almost 1 billion from children’s services over five years are a good place to start.”

In The Guardian’s “Beyond the Blade” editorial, Gary Younge reports on a knife crime fatality, writing that “It is difficult to know what justice looks like when one 15-year-old is dead and another is on trial for their murder.” If, as Younge reports, “the perpetrator is also a child then, on one level, it seems as if some broader, deeper, more intractable injustice has already been committed.”

Younge’s Guardian editorial series profiles the victims of knife crime in order to humanise the epidemic and find the structural reasons for what is going on. The mother of the 15-year-old boy who stabbed and killed Quamari Serunkuma-Barnes, another 15-year-old boy, tells of the multiple times that she reached out to local authorities for help. Multiple times she was told that her child did not meet the threshold to be helped by the Child and Adolescent Mental Health Services. Multiple times she wasn’t listened to by her local authorities until her premonition at a council meeting came true. She had warned that “If we don’t do something, he’s either going to end up dead or someone’s going to end up in a body bag.”

Throughout 2017, 36% of knife and offensive weapon crimes resulted in an immediate prison sentence, which is the highest proportion on record. Rory Stewart, the justice minister, remarked that “These figures show we are catching and prosecuting more of those carrying a blade, and we are sending them to prison for longer.” Stewart argues that “We need sentences that punish anyone who commits knife crime and deters anyone from doing it in the future.” Seemingly as an afterthought, he added that they “are also working to prevent young people from ever picking up a knife in the first place.” Stewart’s comments convey the idea that harsher and longer prison sentences are the answer to rising knife crime. This is symptomatic of the habit of the government and most reporting to ignore the ways in which those carrying knives have been repeatedly failed by the government for years prior.

Craig Pinkney, a criminologist and academic who works with at-risk young people says that “sentencing should be seen as one part of the solution.” This view is especially pertinent considering that nearly 30% of those convicted of a crime go on to reoffend. This statistic is even worse among young offenders, with a reoffending rate of 42% among 15–17-year-olds. In 2016, 68.1% of all convicted juvenile offenders went on to reoffend, and on average, they reoffended five times or more. These statistics speak for themselves.

It is naive (at best) of a government to foster the circumstances of societal exclusion and a lack of hope and opportunity for young – especially poor, young – people, and then expect that harsh punishments will counteract their own systematic failing of young people.

Last September, as the number of knife crime fatalities kept climbing, London Mayor Sadiq Khan announced the creation of London’s Violence Reduction Unit, a programme aimed at treating violent crime as a “public health issue”. Whilst this announcement is a definite step in the right direction, the initiative has been long overdue.

The unit is based on a scheme in Glasgow where police work hand-in-hand with teachers, social workers and health professionals. They identify those most at risk of offending and offer them opportunities – in the form of jobs, housing, training or mentoring – to guide them away from violent crime. The scheme has seen the homicide rate in Glasgow halved in just over ten years. Both schemes are based on the long-term prevention of violent crime, treating the source of violence rather than its symptoms.

An initial £500,000 has been allocated to the London scheme, aiming to address the societal problems mentioned above, including poverty, mental ill-health, social alienation and a lack of opportunity. A mayoral spokesman has said that “The ultimate aim is to divert young people away from criminal activity, by supporting the vulnerable at an early stage and giving young Londoners better life opportunities.”

Treating violent crime as a “public health issue” is finally a recognition of the fact that people who commit knife crimes have themselves been mistreated at a greater societal level. Knife crime is not a crime in isolation: it is a symptom of a chain reaction starting from systematic social alienation and exclusion.

Whilst this initiative is hopefully a turning point for the treatment of knife crime, Steve O’Connell, the chair of the London Assembly Police and Crime Committee, has said that there was a “worrying lack of detail” on how the scheme will work across London: “We will be keeping a close eye on whether this new plan has an impact on the ground and does not end up a missed opportunity.”

Photo: “Fingerprints on a knife, an illustration of investigation methods on crime scenes” by Alchemica, reproduced under the terms of Wikimedia Commons: https://commons.wikimedia.org/wiki/File:Real_fingerprints_on_fake_crime_scene.JPG