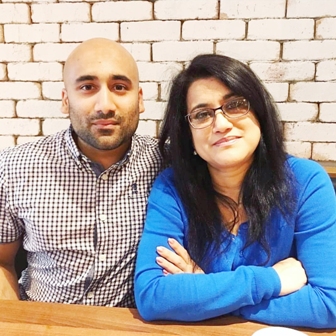 Intergenerational divides are increasingly apparent when it comes to social and political attitudes in British society. Whether it is party vote choice or Britain’s relationship with Europe, age and generation have become ever more important factors. Socio-political attitudes among Britain’s ethnic minority (Black, Asian and Minority Ethnic, or BAME) people is an interesting area of social science research where intergenerational divides also happen to predominate. Whether it is trust in Westminster, British politicians in general, the police force, or satisfaction with Britain’s democratic system of governance, British-born BAME people exhibit levels of political and institutional disaffection which are not shared by their first-generation migrant predecessors.

The 2010 Ethnic Minority British Election Survey remains the richest resource available when it comes to examining socio-political behaviour and attitudes among BAME people living in the UK. Fig. 1 shows that ethnic minority people born abroad are more likely to have a high level of trust in Westminster, British politicians in general, and the police.

Sharp intergenerational divides also emerge when examining levels of democratic satisfaction among British ethnic minority people. When 2010 EMBES respondents were asked: “On the whole, are you satisfied or dissatisfied with the way that democracy works in this country?” 19.0% of BAME people born abroad stated that they were “very satisfied” with how democracy functions in the UK. The corresponding figure for British-born ethnic minority people was only 6.4%. When combining the “very satisfied” and “fairly satisfied” percentages, the figure for BAME people born outside of the UK stands at 77.9%. For their British-born children and grandchildren, it is considerably lower at 52.5%.

When it comes to the most negative response, 14.6% of British-born BAME people stated that they were “very dissatisfied” with Britain’s democratic system. Only 6.7% of ethnic minority people born abroad shared this degree of dissatisfaction.

Fig. 3 plots the predicted probabilities for reporting democratic satisfaction. This is based on a binary logistic regression model controlling for party identification, ethnicity, gender, age, education, social class, main language at home, level of social integration, reported discrimination and neighbourhood deprivation. The two “dissatisfied” and “satisfied” categories shown in Fig. 2 are merged to create a dependent variable coded as dissatisfied = 0 and satisfied = 1. Fig. 3 presents the significant relationship between being born in the UK and being less likely to report satisfaction with British democracy, when controlling for the range of variables stated (with 95% Confidence Intervals, i.e. levels of confidence in the findings). 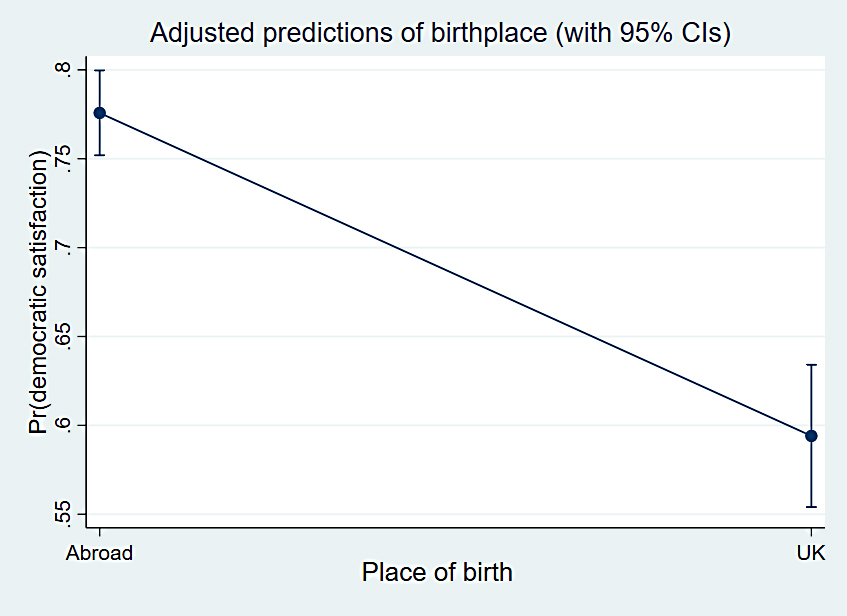 Why the intergenerational divide?

The driving factors behind these intergenerational differences are socialisation and psychological frame of reference. Ethnic minority people born abroad are more likely to have direct personal experiences of living under more repressive, authoritarian political settings. It is important to note that a significant number were expelled under policies of “Africanisation” in countries such as Uganda (under the dictatorship of Idi Amin). Others have fled from civil unrest in countries such as Somalia, the Democratic Republic of Congo and Angola. A considerable proportion also have experience of living in countries where corruption and bribery is rampant among police officials. This means that BAME people born outside of the UK have naturally positive orientations towards the UK’s political system and the police, with British democracy providing a comparatively higher level of stability, freedom and choice.

By contrast, British-born BAME people have little to no experience of such unfavourable socio-political settings. Possessing an exclusively British frame of reference, UK-born ethnic minority people may make greater demands on – and have greater expectations of – the democratic system and formal institutions in their country of birth. Being more sensitive to disappointment, British-born BAME people are less likely to be politically trusting and democratically satisfied than ethnic minority people born outside of the UK.