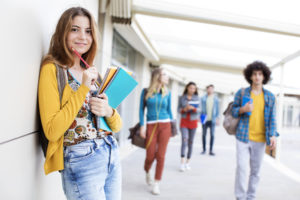 The academic year is just beginning, and with it the next cohort of school leavers are entering university for the first time. All of them will have spent years battling their way through the trials of doing GCSEs and A-Levels in order to reach this moment, in the hope that going to university will translate into a well-paid professional career when they move on to the world of work.

But, with the ongoing debate surrounding whether young adults are being asked to take on too much debt to pay for their degrees, it’s worth examining how realistic this ambition is. The British education system has frequently come in for criticism over recent years for relentlessly funnelling more and more students down an academic route from the age of 16 onwards, whilst neglecting alternatives such as vocational education, despite a certain amount of mixed evidence about the value of doing a degree. However, proponents of the current system can point to a large body of research which suggest that graduates are more successful than non-graduates across a wide range of metrics, and that they have maintained these advantages over time despite the huge increase in the share of the adult population which has been to university over recent decades. So, what does the evidence actually tell us about whether it’s worth the cost of doing a degree?

There are a few important caveats which need to be given up front before we delve into the weeds of detail on this issue. Firstly, as any good statistician will tell you, nobody is average; this means that whether or not going to university is the right choice for an individual student is a question that only they and the people who have their best interests at heart can answer. Analysis based on comparing the average outcomes across large groups of people can, at best, only provide a probabilistic indication of how things are likely to turn out for any one person. Secondly, this article is almost exclusively concerned with the monetary returns to doing a degree course, but students obviously go to university for a wide range of other reasons besides earning more money in the future which are much harder to quantify, such as gaining independence, meeting other young people and so on.

Turning to the evidence itself, according to the most recent ONS figures there are currently around 14 million graduates working in the UK economy (not including current students), which means that they account for about 42% of the entire workforce. This represents a substantial increase in a relatively short period of time, as the equivalent figure was just 24% as recently as 2002. By comparison, there are about another 7 million employed workers whose highest qualifications were A-levels (or equivalent) and about another 7 million whose highest qualifications were GCSEs (grades A* to C), while there are also around 6 million workers who either have qualifications that can’t be categorised or simply have no qualifications.

The two statistics which are most often presented to buttress the argument that a university degree is a good investment for students are firstly, that graduates have lower unemployment than non-graduates and secondly, that graduates earn more (the so-called “graduate premium” compared with non-graduates). While these facts are both broadly true, they need to be assessed with a degree of nuance which is often missing from this debate.

On the face of it, graduates do have higher employment than non-graduates. ONS data show that among workers who are aged 22 to 29, 90% of graduates are currently employed compared to only 78% of non-graduates. However, the same data also indicate that this is something of an apples to oranges comparison, because the reasons why non-graduates have lower employment is explained to a large extent by the much higher share of economically inactive people (i.e. those who are not currently looking for work) within this group, rather than simply because there is so much more demand for graduates than non-graduates within the British economy. If you look at just the unemployment rate (i.e. the percentage of people within each group who are looking for work but can’t find it) then the difference between graduates in this age group (of whom 4.6% are unemployed) and non-graduates (6.8%) shrinks to just 2.2%. Therefore, while graduates who want to work are indeed more likely than non-graduates to find employment, the difference is currently pretty small, at least among younger workers.

These figures also raise a couple of interesting questions. Are graduates more likely to be in employment actually because they are graduates, or could some other factor be at play? And, on a related note, are they doing work which should actually require a degree in the first place? Clearly, these questions are not straightforward to answer. However, there is some evidence that quite large numbers of graduates are employed in non-graduate jobs, and a higher proportion than you might expect of non-graduates are actually doing “graduate” jobs. Using a classification scheme which the ONS invented for discerning between “graduate” and “non-graduate” roles, they found that 12% of employed workers aged 22 to 29 who were non-graduates were doing a “graduate” job, while (somewhat surprisingly) only 54% of graduates within the same age group were doing a “graduate” job.

The data suggest that non-graduates find their way into graduate jobs, especially in the retail and wholesale sector, which may reflect people who start off as apprentices managing to work their way up into management roles. The finding that a surprisingly high proportion of graduates work in non-graduate roles mirrors the observation from a large piece of research that was carried out at the University of Warwick, which showed that the proportion of graduates doing non-graduates jobs had risen in correspondence with the general increase in the number of graduates, from 41% in July to September 2002 to 49% in July to September 2017. Although it can’t give a definitive answer to any of the questions which have been posed, this evidence does suggest that the slightly lower unemployment rate among graduates is at least partly a result of large numbers of them doing non-graduate jobs, and therefore not specifically a consequence of them having degrees.

However, other research has demonstrated that this obscures an enormous degree of variation between students who have studied at the same institution and students doing the same courses at different institutions. A major investigation into this issue which was led by the Institute for Fiscal Studies (IFS) has found that, among men, median earnings five years after graduation varied between £44,900 for graduates who studied Medicine to only £22,200 for graduates who studied Creative Arts. Likewise, across all subjects, male graduates who studied at Russell Group institutions earned £36,100 on average compared to £26,200 among their peers who attended post-1992 institutions (i.e. former polytechnics). Prior attainment is also a key component of earnings post-graduation as well, as is family background.

The key question to ask about this is how much of the earnings premium which graduates enjoy can be attributed to the universities themselves, and how much of it would have occurred anyway because it is the result of other characteristics they possess. This is an extremely difficult question to answer because such a large share of students who come from the most affluent backgrounds, and those who achieve the highest grades at school (two groups between which there is very significant overlap), go on to university that it is difficult to make a fair comparison between graduates and non-graduates.

However, the conclusion which the IFS researchers reached was that there are significant subject- and institution-level impacts on average earnings even when you control for the personal characteristics of graduates, including prior attainment, socio-economic background and ethnicity. Holding these factors constant, a degree from a Russell Group university, on average, still leads to earnings which are 13% higher than those of the “average” graduate five years after graduation, while medicine, economics and business still come out top of the subject league table even when you account for the fact that, broadly-speaking, students from more affluent backgrounds (who you would expect to enjoy higher than average wages in the labour market even if they didn’t have degrees) are more likely to study them.

So, to sum up, the average graduate who wants to find a job after graduation is still more likely to be employed than the average non-graduate, and they are currently likely to earn more, but with significant caveats.

Firstly, the gap in employment rates among younger workers is pretty small when you only look at people who are actually looking for work, and the comparison is clearly flattered by large numbers of graduates doing jobs that may not require a degree.

Secondly, the gap in pay is influenced by an enormous range of factors including personal background, the institution someone attends and the subject they study; people from richer backgrounds who study medicine (or a related field), computer science, economics or business-related degrees at the most competitive institutions account for a large share of the graduate premium, while it appears there may be a number of courses and institutions which generate very little or no graduate premium on average at all. And this is without mentioning that the current student finance system will place the greatest burden on students who end up in the middle of the graduate earnings distribution (diluting the premium for the “average” graduate more than for the system’s biggest winners or losers), or that its terms could be adjusted to make them less favourable to existing borrowers. It’s also worth pointing out that these comparisons are all backwards-looking; it remains unclear how the graduate premium will change as more and more graduates enter the labour market, but research from the OECD has suggested that the labour market advantage of graduates is inversely proportional to their quantity – as you would expect from simply supply and demand economics. From a purely economic point of view, going to university can make you richer, but it is far from guaranteed to do so.