Chloe Wall, IF researcher, examines the news that Millennials may be to blame for the declining popularity of the potato 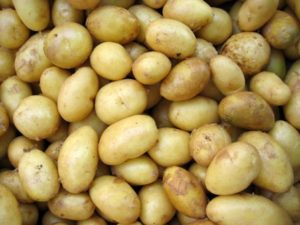 So often we hear about young adults overbuying avocados and lattes, but now it seems it’s Millennials’ lack of food purchases that’s making the headlines. Yesterday, The Grocer announced that in the last three years, sales of potatoes have dropped by 5.4%. What has caused this drop in the popularity of starchy deliciousness? Unsurprisingly, the scapegoat generation are to blame.

The Grocer suggests one reason for the declining popularity of the humble spud is young adults’ preoccupation with making healthy diet choices. Because of its reputation as a “stodgy carbohydrate”, it appears that young people are moving away from potatoes as a go-to dish. Whilst the obvious, and easy, response to Millennials’ keenness to be healthier is to mock their love of quinoa and avocado, perhaps there is something to applaud here.

The current generation of young people are more health-conscious than ever – overwhelmingly less likely to smoke, and more likely to adopt healthy lifestyle choices. Can we really blame them for choosing other carbohydrate staples, such as rice and noodles, if they are doing so in a quest to make healthy decisions? Of course, The Grocer dismissively labels these alternatives as “healthy and exotic”, perpetuating this idea that young people are in constant pursuit of trendy food items, rather than credit them with having made a choice based on nutrition value.

Potatoes take slightly longer to prepare than other alternatives, leading to suggestions that young people are no longer having them in meals because of the time taken to cook them. Indeed, rice sales have shot up by 30% in four years and microwaveable rice is now an industry now worth £250 million per year. Of course, such reasoning encourages the tired trope that young people today are lazy and impatient. But really, it should come as no surprise that time-poor young people are finding time-efficient ways of cooking their food.

Believe it or not, this is not the first time the link between Millennials and potatoes has been highlighted. As far back as 2014, before potato sales started to fall in the UK, the United States Potato Board stated the importance of understanding “Millennials and how potatoes fit into their lives – now and in the future”. And in 2015, the UK’s Agriculture and Horticulture Development Board (AHDB) launched a campaign called “Potatoes: More Than A Bit On The Side’”, in an attempt to boost the popularity of this previously well-loved foodstuff. The campaign itself includes a range of recipes, with a particular focus on healthy and quick meals. It has pulled in various “Millennial Celebrities”, such as Ella Mills and Camilla Thurlow (of Deliciously Ella and Love Island fame, respectively). With over 200,000 likes on its facebook page, the campaign does seem to have been something of a success.

Whilst these campaigns may all seem slightly amusing, it absolutely underlines the importance of understanding and valuing the spending power of young adults. If Millennials were to completely turn their back on spuds, there would be lots of unhappy farmers. However, we certainly should not be so quick to pin unsatisfactory sales numbers on the actions of a single generation, or indeed judge them so harshly for perhaps changing their food preferences.