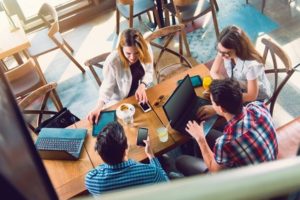 Today’s generation of teenagers and young adults in the UK has frequently been labelled with the moniker “Generation Sensible” by the media in recent years. A recent BBC news article provided a large amount of evidence in support of this trope by expounding on the statistical evidence that shows today’s teenagers are less likely to drink, smoke, do drugs, have teenage pregnancies or get arrested than their predecessors in previous cohorts were.

On the one hand this characterisation is extremely positive for young people, who are all too often misrepresented (or even demonised) by the media over issues such as knife crime and binge-drinking. However, it does raise the question of whether it is really accurate to characterise young adults in this way, or whether it could be a blanket generalisation which overlooks some important problems that continue to affect young adults disproportionately.

As mentioned above, the “Generational Sensible” moniker is normally applied to the current cohort of teenagers and young adults as a means of distinguishing them from their counterparts in previous generations who were closely associated with certain kinds of licentious behaviour which society generally looked down upon. The evidence for “Generation Sensible” covers a number of different areas.

Firstly, today’s young adults appear to be drinking less than was the case among the same age-group near the beginning of this century. Data from the ONS which are presented in the BBC article suggest that the proportion of 16–24 year-olds who’ve drunk alcohol in the past week has dropped significantly from about 60% in 2005 to around 45% in 2017. Interestingly, this change appears to have been buttressed by a rise in complete teetotalism among this age group, with another set of figures suggesting that 27% (almost one in three) 16–24 year-olds said in 2016 that they don’t drink alcohol at all, compared with just 19% (less than one in five) in 2006. Of course, people do tend to underestimate how much they drink when researchers ask them (whether intentionally or not), but as the same survey has been collecting these data consistently over a long period of time you would expect the level of misreporting to have remained fairly constant.

Secondly, ONS data also suggest there has been a fairly significant decline in the share of young adults who admit to having taken drugs. Between 1996 and 2016, the proportion of 16–24 year-olds who said they’ve ever taken drugs followed a steady downward trajectory from around 50% to about 37%. As with most of these long-term changes, it’s extremely difficult to pinpoint a specific cause for each one, although one possible factor could be that people who use drugs have become more likely to receive jail time since the 1990s. Another fascinating possibility which has been raised by researchers in the USA (where very similar declines in rates of smoking, drinking and drug-taking have also been observed among young adults throughout this period) is that smartphones and the ubiquitous use of apps have to some extent taken the place of drugs among young people by providing a comparable sense of instant gratification.

Thirdly, rates of teenage pregnancy have also fallen dramatically, from about 70 per 100,000 women who were under 20 in the population in 1992 to around 35 per 100,000 women in 1996. Again, the reasons why has happened are complex, but a recent piece of research by the British Pregnancy Advisory Service which asked young people to keep diaries documenting how they spent their time suggested that they are becoming less likely to form sexual relationships at young ages, partly because they are doing more of their dating online rather than in the real world. It would also seem plausible to suggest that higher levels of educational attainment among teenage women, who have become significantly more likely to achieve A-levels and go on to university during this period, could have played a role given that female education has been proven to make women delay when they start having children.

Fourthly, 16–24 year-olds have also become much less likely to smoke, with the percentage who do so almost exactly halving between 1977 and 2017 from 40% to 20%. In this case the reasons for this trend do seem fairly self-evident, because this decline almost precisely mirrors the fall in the percentage of people who smoke within the population as a whole, which went from around 45% to 17% during the same period. Thankfully, smoking appears to be on the decline among all age groups as our knowledge of its harmful effects has increased.

Finally, young adults have also become significantly less likely to get arrested: in the decade between 2007 and 2017, the number of arrests of 10–17 year-olds fell dramatically from around 350,000 to just under 100,000 per year. This is even more surprising when you consider that the size of this age group actually increased during the same period. This may be because of changes in police tactics, which now emphasise giving young people cautions and warnings rather than actually arresting them; whether it means that younger people have become less likely to commit crimes is a very difficult question to answer because of gaps in the available data.

Looking at these data in the round, something interesting is clearly going on. Indeed, if you factor in the knowledge that similar trends have been observed in America then it would appear that some quite major global forces could be shaping young adults’ behaviour, such as the complete transformation over the past twenty years in the role that technology plays in their lives, rather than the explanation lying only in UK-specific factors.

However, it does also need emphasising that this is not the whole story. There are some important lacunae in the “Generation Sensible” narrative which need addressing so that young people who haven’t benefited from all of these trends, who may be vulnerable and in need of specialist support, are able to access it. Perhaps most alarmingly, quite a large volume of research suggests that the UK’s young adults have a significant problem with being overweight, which public policy urgently needs to address. By projecting forward current population trends, it has been estimated that 70% of the people who were born between 1980 and 1995 will be either overweight or obese by the time they reach middle age, compared to less than half of Baby Boomers when they were the same age. This point is certainly not meant as criticism of the young people themselves but, rather, exists to emphasise that the notion that most of today’s young adults are especially health-conscious may be both inaccurate and actively unhelpful when it comes to designing public health interventions which are aimed at them.

Another important issue which needs addressing is mental health problems among young adults, which fortunately are currently receiving more attention from both the media and policy-makers. Very recently, new figures showed that the number of hospital admissions for self-harm among teenage girls has more than doubled in the past two years. An increase in the number of people being treated for a mental health disorder can actually be a good thing if it represents a growing awareness of both the problem and how it may be dealt with, but there does seem to be a rising tide of concern that the mental health of today’s young people is deteriorating. This is likely to be partly because of increased educational and economic pressures, but also technology and social media are frequently blamed for giving people unrealistic expectations towards how they look and in other areas of their lives. Given that social media have also been implicated in the points made above about lower levels of teenage pregnancies and drug abuse, clearly there is much that still remains to be understood about the effect these new technologies are having on young people.

Overall, the “Generation Sensible” narrative has a lot of truth to it, but it would be wrong to think that the situation is uniformly positive for teenagers and young people. Many of them are still grappling with major problems that they require plenty of support to deal with.