IF’s Rakib Ehsan summarises the important intergenerational findings of the latest British Social Attitudes Survey (BSA 35). As well as there being clear intergenerational divides in regard to party support and support for EU membership, there is evidence of an “attitudes chasm” between the oldest and youngest cohorts of Britain’s voting-age population over welfare provision and gender roles 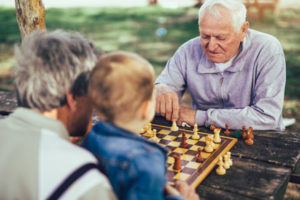 Data from the latest British Social Attitudes survey published by the National Centre (NatCen) for Social Research provide further evidence of the sharp intergenerational divide between the youngest and oldest cohorts within the UK’s voting-age population in terms of attitudes and values. Clear intergenerational divides in party support and support for EU membership have been well established by a number of studies, with younger generations being more far more likely to support the Labour Party and hold more positive orientations towards the EU than are older members of British society. As well as reaffirming these intergenerational patterns, the BSA 35 (so called because this is the 35th  consecutive year of the survey, starting in 1983) also reveals interesting attitudinal differences between the younger and older sections of the British electorate on issues such as welfare provision for working parents and the role of women within the family unit.

The younger and older sections of Britain’s voting-age population share similar views on unemployment benefits provision in the UK: 22% of those aged 18–25 think the government should spend more on unemployment benefits, with the corresponding survey figure for those aged 65 and above being 20%. However, intergenerational divides emerge when the attention is turned to greater welfare support for working people with children: 67% of 18–25 year olds felt that the government should top up the wages of working couples with children, but only 46% of those aged 66 and above felt the same. While 20% of 18–25 year olds thought that it is up to couples to look after themselves and their children the best they can, this figure balloons up to 37% for those aged 66 and over.

While there is broader support for increasing welfare support for working lone parents, intergenerational differences are also revealed for this survey item. While 79% of those aged 18–25 believed the government should top up wages for lone parents in employment, the corresponding figure for those aged 66 and over was 22 percentage points lower at 57%.

The BSA 35 also explores shifting attitudes towards gender roles in the context of the work/home balance. There is evidence that the British public is moving away from traditional views of men as “breadwinners” and women as “homemakers”. Today, 72% of British people disagree with the view that it is a man’s job to earn money and it is a woman’s job to “look after the home and family”, which is a 14 percentage-point increase from the 2008 figure of 58%. However, sharp intergenerational attitudinal divides are found in attitudes towards the arranging of gender roles within heterosexual partnerships and the role of women in the broader family context.

While three in four 18–34 year olds disagreed with the “conservative” male breadwinner/female homemaker arrangement, only 47% of those aged 75 and over followed suit – representing a 28 percentage-point gap. This pattern is replicated over the subject of mothers working, with older people holding a more traditionally conservative view on the work/home balance for women with young children. Nearly half (49%) of those aged 75 and over felt that mothers with a pre-school child should stay at home, while only 30% of those aged 18–34 agreed with this view.

The intergenerational attitudinal divides between the younger and older cohorts of British society are arguably the product of varying socio-economic contexts across the generations. A considerable proportion of Britain’s people who are aged 75 and above lived much of their working lives in an economy where one reasonably-sized income was sufficient in terms of meeting the basic costs of living – without financial support from the welfare state. As well as the matter of prevailing social norms in previous times, the male breadwinner/female homemaker arrangement was far more likely to be a financially sustainable option. Therefore, when taking previous socio-economic and cultural contexts into consideration, it is perhaps unsurprising that older parts of British society hold more conservative gender role beliefs and are less supportive of expanding welfare support for working people.

The socio-economic context for Britain’s young working people is very different, and one which poses a myriad of social and economic challenges. A broken housing system means there is a chronic undersupply of affordable properties. Exorbitant rent rates are now a dominant feature of the more economically productive regions of the country. Transportation costs continue to rise for Britain’s working commuters. This is all the more problematic when one considers the dearth of well-paid, secure employment opportunities for younger people.

The stark reality is, a considerable number of young people cannot meet the basic costs of living if they do not receive some form of welfare support – and even those in better-paid jobs would find it exceptionally difficult to meet household expenses, such as mortgage repayments for a family-friendly property, without a second source of income.

Shifts in social norms, along with the socio-economic demands associated with life in modern-day Britain, mean that two-income households where younger couples share financial and child-rearing responsibilities are increasingly becoming the spine of British society.