The Goenchi Mati movement has recently seen a momentous breakthrough. Chloe Wall, IF researcher, examines the implications of this for intergenerational fairness 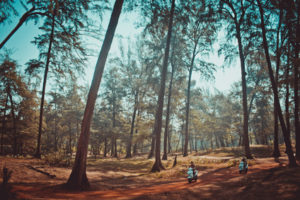 The Supreme Court of India has just agreed to cancel all existing mineral leases in Goa, quashing 88 licences belonging to 20 companies. Coming after an enormous amount of advocacy work from the Goenchi Mati movement, the judgement represents a huge success for environmentalists in India. Not only this, it is a monumental step forward for intergenerational fairness in Goa, and indeed, sets a precedent for the rest of the country.

Before delving into why this ruling represents an increasing awareness of equality between young and old, it is necessary to understand the issue at hand. Situated on the west coast of India, and known for its beautiful coastline and complex history, Goa has developed a reputation as a popular holiday destination. What may not be immediately apparent to the casual holiday-maker is the booming iron mining industry. Goa has large deposits of iron ore, and has been extracting and exporting it for the last 50 years. Since 2007, the rates of extraction have ramped up, as a result of China’s economic boom and the subsequent spike in iron prices. This significant expansion of the mining industry has unsurprisingly led to devastating environmental impacts, with noticeably damaged ecosystems and the dramatic depletion of the mineral itself.

When reporting on Goa in 2012, the Shah Commission noted the worryingly finite nature of this resource – estimating that, with known reserves and extraction rates, the iron ore would be exhausted within nine years. Not only this, it noted that the dumping of waste as a by-product of extraction was causing potentially irreversible environmental damage. The report gave 22 recommendations, many of which related to the lack of intergenerational awareness, and the need for rapid action.

The Goenchi Mati movement, and the Ore Chor! 144 campaign, are spearheaded by the Goa Foundation in direct response to mining in Goa. Formed in 1986, the Foundation has gained respect and notoriety in the last decade for publicly tackling the Goan mining sector and speaking the truth about corrupt practices. Their advocacy work is underpinned by two fundamental beliefs:

The Goenchi Mati Movement, which literally translates as ‘Goan Earth’,  is a grassroots movement which raises awareness of the need for fairer mining practices in Goa. In particular, it keeps these intergenerational principles at the heart of its advocacy, and the recent ruling to quash existing mining leases moves towards achieving their goal.

Their recent success is not the first time they have won at the level of the Supreme Court of India. In 2012, the Goa Foundation submitted a petition which led to the prohibition of new mining activities starting in Goa, the first step in their goal of making mining more sustainable now, and for the future. In doing so, the Supreme Court of India explicitly noted that intergenerational equity was one of four principles that are part of the “right to life” in the Indian Constitution.

However, a significant backward step was taken in 2015, when the government at the time decided to renew the mining leases in Goa – effectively reversing the 2012 ruling. Consequently, mining pushed forward in earnest, as there were no restrictions. This 2015 decision was seized by the lawyers who most recently bought the challenge to the Supreme Court, arguing that these renewals were “hasty and illegal”.

Intergenerational equity underpins much of Goenchi Mati’s advocacy. But what does that really mean? In the UK, it is not a concept that is much aired in the discourse concerning the imbalance between young and old, but it is an important part of culture and values in India.

The definition of intergenerational equity has echoes of the Brundtland report’s definition of sustainability, and essentially outlines the idea that future generations should be able to inherit the same resources and opportunities as present generations.  In India’s draft Natural Mineral Policy, it is stated that natural resources are a shared inheritance, and that “the state is the trustee on behalf of the people to ensure that future generations receive the benefit of inheritance”.

Until the recent decision, mining practices in Goa represented a significant departure from the principle of intergenerational equity, as the state only captured a small amount of the value from the iron ore: little is left to pass down to future generations. This is where the Goenchi Mati movement steps in, calling for fairer practices that value future generations. If iron ore is to be extracted, and indeed it is a valuable source of economic income, then it should be done so in a measured way that preserves a fair share for future generations, while ensuring a fair portion of the value benefits current local communities.

Therefore the Goa Foundation also calls for something resembling a “permanent fund”, similar to how Nordic countries conserve their profits from oil wealth to pass on to younger generations. Norway’s sovereign wealth fund is a spectacular example of how successful this can be, having recently just passed $1 trillion.

The Goenchi Mati movement continues to remain actively and effectively advocating for intergenerational equity to be incorporated into future environmental policy in India. It is an exciting time for this movement as, in the coming weeks, the Supreme Court will hear debates on the mining cap in Goa, as well as the status of Goa’s Permanent Fund, both of which may impact how intergenerational equity will be incorporated into the National Mineral Policy. There are important intergenerational lessons to be learnt from this determined and ground-breaking work – both in the UK, and across the globe.