The biennial Intergenerational Justice Prize has just been announced, with a deadline of 1 July 2018, and a total of €10,000 (yes, ten thousand euros) up for grabs. IF’s Antony Mason explains 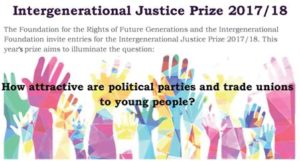 Each year the Intergenerational Foundation and the Stuttgart-based Foundation for the Rights of Future Generations (FRFG) join forces to promote a prize for academic writing with a total value – shared among a small handful of winners – of €10,000.

Last year we ran the Demography Prize; this year it’s the turn of the Intergenerational Justice Prize. Both prizes are generously endowed by the Apfelbaum Foundation.

The winning essays also stand a good chance of being published in the widely-respected academic journal, the Intergenerational Justice Review.

Political parties and trade unions in the spotlight

The topic of this year’s Intergenerational Justice Prize is “How attractive are political parties and trade unions to young people?”

Entrants can use that title, or are free to adapt it to better suit their theme – provided that it corresponds closely enough to the thrust of the topic.

Membership is a vital element of the functionality and status of political parties and trade unions, but are they doing enough to attract young people?

This is a critical issue because political parties (and trade unions) are vital elements of modern democracies. Party members, in particular, represent fundamental linkage mechanisms of representation and participation that connect citizens with the state.

Although party members have hardly ever been entirely representative of the population in their demographic characteristics, the general decline of party membership seems to affect younger generations disproportionately. They enrol less often in parties, rendering the parties’ age-profiles all too often considerably older than the broader electorate that they hope to embrace.

Trade unions across Europe are facing similar problems in recruiting young members. Younger people are confronted with the rapidly changing nature of the workplace as well as the rise in temporary work and zero-hours contracts, and are probably more interested in salaries, entry requirements and work contracts, rather than in end-of-career matters such as pensions and retirement ages.

Given members’ importance and their overall age profile, it could be argued that political power or access to it is unequally distributed between the young and old. Parties and trade unions might be disproportionately representing older rather than younger generations because of their own social-demographic makeup. This could create an unjust distribution of political influence between living generations.

Researchers from all fields of social science, especially young researchers (students, graduates, post-docs). There is no age limit. Collaborative submissions are also welcome.

Entries can be submitted in English or German.

Further details, and some further suggestions for approaches to the topic, are available on the IF website.