We recently launched a report on young people and the 2017 General Election, and representatives from the major parties attended our panel event at the Houses of Parliament. Beth Jenkinson, IF researcher, describes the resulting discussion and explores its implications for intergenerational fairness 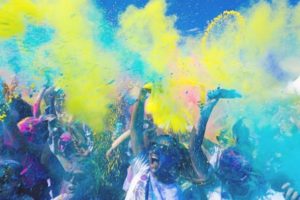 We recently launched our new report: Youth Quake: Young People and the 2017 General Election, with an event in Parliament (kindly co-hosted by Peter Dowd MP and Lord Tyler). As well as the authors of the report, James Sloam and Muhammad Rakib Ehsan, our panel included representatives from the major UK political parties. Ben Bradley MP spoke about the report on behalf of the Conservatives, Peter Dowd MP responded for Labour, Lord Tyler represented the Liberal Democrats, and Amelia Womack, Green Party Deputy Leader, gave her party’s take.

The resulting discussion was frank and refreshing, with overwhelming cross-party agreement that young people need to be put at the centre of the political agenda – if equally blatant disagreement as to how this should be done. That everybody on the panel seemed totally literate in the problem of youth political engagement prompts the question: why aren’t we seeing any real change in policy?

The Youth Quake report highlights the increase in youth turnout that we saw in the 2017 General Election, which was up by 21 percentage points to 64% (from 43% in 2015). All of the panel members were optimistic about the increased youth turnout, and none of them surprised.

The entire discussion was framed by the premise that we already know that young people are political, that they run extraordinary campaigns and engage in demonstrations, boycotts, and a whole range of political and civic activities. It is thus the failure of political systems and institutions to engage them that has led to apparent apathy at the ballot box in recent years. That the increased youth turnout was a fantastic outcome of the 2017 election was unanimously agreed by the attending political representatives, no matter who the beneficiaries were.

Conservative MP Ben Bradley admitted freely that the Conservative Party did not communicate well with young people in their election campaign, and acknowledged that Jeremy Corbyn had connected well with a young audience because of his authenticity and honesty, as well as the Labour Party’s better use of social media to engage with young voters. He agreed that the Conservatives had a lot of work to do in their appeal to young people, but admitted that “it is hard to achieve change internally.”

Peter Dowd, Labour MP, attributed the higher turnout to Labour’s positive messaging, arguing that by telling people what they were for, rather than what they were against, they were better able to energise young voters. Amelia Womack, for the Greens, discussed how university students are often labelled “snowflakes” for standing up against discrimination and oppression, so perhaps Corbyn’s willingness to engage with their kind of politics – with his principled stance and his background as a grassroots campaigner – was able to dispel some of the disillusionment.

The Labour Party also managed to capture young voters from the Greens (whose share of the youth vote fell from 8% in 2015 to 2% in 2017) and the Lib Dems (who, in spite of their youth-oriented Brexit focus, failed to retrieve support from young voters after the catastrophic collapse from 30% of the youth vote share in 2010 to 4% in 2015). Lord Tyler, Lib Dem Peer, attributed some of this third-party movement to increased tactical voting by younger people, which has certainly been catalysed by tactical voting campaigns such as Swap My Vote, which allows people in different constituencies to trade votes so that their vote will have an impact on the result.

The obvious conclusion is that young people voted for Labour because of their policies, which focused on improving the living standards of young people, and included reinstating housing benefit for 18–24 year olds, abolishing tuition fees, banning zero-hours contacts, and more. However, Ben Bradley contended that the Conservative Party manifesto was very intergenerational, with its attempts to redress the balance between asset wealth and income by reforming the way the elderly pay for social care and by removing the “triple lock” on pensions, which has led to the increase in pensioner income such that the average pensioner is now better off than the average working person.

There were mixed views as to why young people didn’t get on board with the Tories’ intergenerational policies. It may just have been a case of “Bad Comms”, in that most young people didn’t seem to know or understand that these policies would lead to a transfer of wealth towards them. It may also be the case that the negative messaging, and the lack of any counterpart positive policy aiming to direct this increased government income towards young people, simply didn’t wash with younger voters. Amelia Womack, deputy Green leader, envisioned a younger generation who didn’t necessarily want to choose between free tuition fees and the triple lock, and pointed out that austerity of any kind is a political choice.

At a certain point in the panel discussion, the constructive conversation between the panel members began to break down and MPs blamed one another’s respective parties for the lack of cross-party consultation on these issues. Peter Dowd squirmed when he was asked about why Labour had turned its back on the potential for cross-party consensus around removing the triple lock, and pointed out a lack of cross-party collaboration from the Conservative side on many other issues. The answer to the mystery as to why there is still so much to be done on the youth politics question, in spite of such a wealth of understanding around the issues, became clear, and Paul Tyler spelled it out for us: intergenerational fairness requires a cross-party approach, and the short-termism of party politics is preventing collaboration.

More than that, each of the parties has something unique to offer young people. If you took all of these policy proposals together, they’d create a bright future, but alone they’re ineffective. Labour and the Greens have the positive message covered: their promises to raise living standards for young people are optimistic and inspiring, and appeal to young people on that basis.

However, as Peter Dowd and Amelia Womack made clear, neither party seems to grasp the idea that intergenerational unfairness has come about because of the systematic prioritisation of older generations in public expenditure, and any attempt to redress the balance must involve transferring some of this wealth back to younger generations. It is not enough to commit to prioritising everyone when inequitable policies such as the triple lock and non-means-tested winter fuel allowances are still in place. The Conservatives, who pledged to review these intergenerationally unfair benefits, understand this point but are lacking in positive policies which transfer this wealth back to young people. The Lib Dems, meanwhile, remain committed to voicing concerns about how Brexit will affect young people and pledging voting rights for 16–17 year olds, but they lack the institutional power to bring about any change.

We need a policy package that includes all of these things: where young people are prioritised in public expenditure and political parties aren’t afraid that removing unfair privileges will lose them the grey vote to a competing party. The short-termism of politics will make this difficult to achieve, but at least we have the components of a joint party vision on a fairer future, ready for whenever any party should choose to build it.