IF’s latest report gives a breakdown of the Millennial vote at the EU Referendum, and identifies four distinct “tribes”. Angus Hanton, IF Co-founder, explains why these voters form an important bloc that must not be ignored 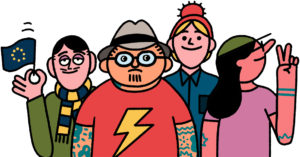 What do young people want from Brexit? We all know that the young voted overwhelmingly for remain with two-thirds in favour of staying in, but latest research suggests that Millennials are not a homogenous group; instead they are made up of four different “tribes” each with their own particular preferences for post-Brexit policies which policy-makers should take greater account of as negotiations intensify.

According to our research of the British Election Study, “Affluent Pro-Europeans” made up 28% of millennial voters, with close to 100% of them voting Remain and likely to want a Brexit that does least harm to the economy. Evenly split between the main political parties, this group has a strong British identity and is made up of predominantly White-British Millennials. It is the best educated and wealthiest of all the tribes.

Celtic Pro-Europeans made up the second tribe. 88% of this group voted Remain and 70% supported either the SNP or Plaid Cymru in the last General Election since virtually all live in Scotland and Wales. This group also wants higher immigration. They are well educated, and report feeling a weak/British national identity. They view the EU as providing a counterbalance to England’s dominant role in relation to the rest of the UK.

Left-wing Pro-Europeans (32%) virtually all voted Remain. 50% of them voted Labour and about a third voted Green in the last General Election. This group’s values appear to be rooted in a concern for the environment and social justice as well as hostility to the nationalist and anti-immigration rhetoric surrounding the Leave campaign. Two-thirds say they want higher immigration even though they have the largest number of members saying they are at a high risk of poverty. This challenges the received wisdom that less affluent people uniformly backed Leave. They comprise the highest share of private renters and one-third of them live in London or the South East.

The last tribe is made up of Eurosceptics (32%), 85% of whom voted Leave, have the lowest level of educational attainment of any tribe, want lower immigration, hold a very strong British identity, and are overwhelmingly White British. These characteristics match those of the well-established “left behind” narrative of the referendum but interestingly they are not markedly poorer than other classes, which demonstrates that cultural values were just as important as socio-economics in determining how people voted.

Has time changed the Millennials’ views over Brexit? According to YouGov polling undertaken shortly after the 2017 General Election, 61% of 18–24 year olds now believe that the referendum result should be accepted as it was a democratic vote. They therefore do not conform to the supposedly undemocratic “Remoaner” stereotype perpetuated in the British media since the referendum.

That does not mean that their anxieties over Brexit should be ignored. The biggest concern for the coalition of Remainer Millennials is minimising the harm that Brexit does to the economy. And who can blame them? Their generation has suffered the most financially from the fallout of the global financial crisis. They have had their student fees tripled, faced stagnant wages , suffered from the rise of the “gig” economy with zero-hours contracts and precarious employment. Their generation has had to cope with the most acute welfare cuts of all generations while home ownership has moved ever further from their reach. This highly educated generation is wise enough to foresee how a post-Brexit recession could further undermine their ability to have the same standard of living as their parents’ generation while their European friends and neighbours continue to enjoy the protection of being in a family of 28 member states.

The coalition of the three Remainer tribes also demonstrates that immigration is not an issue for their generation. Many Millennials say they want more not less immigration, see themselves as European and view the ability to be able to move freely around Europe, like that enjoyed by previous generations, as a generational right.

The continuation of EU worker protection and human rights is also important to young Left-wing Pro-Europeans and should give policy-makers pause for thought.

Living with the Brexit legacy

Our fear at the Intergenerational Foundation is that the government will ignore the views of the younger generation as it has a bigger incentive to deliver a version of Brexit which responds to the preferences of older Leave voters, who disproportionately vote more conservatively as they age. Already the old-age lobby group AgeUK has published an 11-point plan setting out what they want Brexit to mean for older people. The cacophony of different voices all demanding their own specific version of Brexit could drown out the voice of younger generations, most of whom will have to live with the consequences of Brexit for longer than any other age group that voted in the referendum.