Beth Jenkinson, IF researcher, discusses the findings of a recent Canadian report on “co-residence” between the generations and the implications this might have for the UK, where young adults are increasingly living with their parents during their working lives 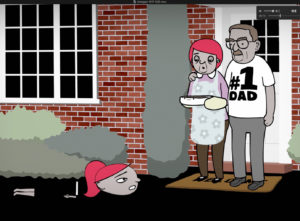 Except it’s more than just a fad: young people in their 20s and 30s are increasingly opting to stay in their family home as they begin their working lives. This phenomenon spans further than the UK, where 25% of all 20–34 year olds lived with their parents in 2016, compared with 20% in 1996. Throughout Europe, the proportion of Millennials living at home is rising, and the US pegs their own figure at 31%. Throughout this article, we will refer to the phenomenon of younger people living with their parents as co-residence.

The GenY At Home project team at the University of Waterloo conducted research into the experiences of those Millennials who are living with their parents in Toronto, Canada, where almost half of young adults live with parents (47.4%). In the context of their report, this blog will examine the reasons behind this new trend and the broader implications for countries who are seeing a rise in co-residence.

Why are younger people suddenly so keen to move back in with the ’rents?

The main reasons that Generation Y live with their parents are economic. In GenY At Home’s report, 72.9% of young people were living at home in order to save money. 42% of those surveyed further indicated that they couldn’t afford to rent, 32.4% were paying off debt, and 25.1% were looking for work. Of course, these factors can reinforce one another, and it may be that people need to save money before moving out because rental costs have increased. This is certainly the case in Britain, where the average rent is £112 higher than it was in 2007, even though average incomes have risen by much less.

In short, younger people nowadays are facing much more expensive housing than faced by previous generations. Even if individuals can afford extortionate rental prices, by renting they leave themselves with very little spare income to put towards saving for a deposit on a home. For instance, in the UK, Generation Y are typically spending three times more of their income on housing than Baby Boomers did at the same age. It therefore makes economic sense for younger people to live with their parents in order to be able to save income and facilitate putting themselves on the housing ladder later.

Is it a good model?

Since co-residence is on the rise, it’s important to examine the effect it has on the parents and children involved, as well as on society as a whole. There are negative stereotypes around the co-residence model – like its being seen as uncool or lazy – and for some it might just feel like they are taking a step backwards by moving back in with their parents after having, say, graduated from university.

However, the report challenges these negative stereotypes and draws some very positive conclusions from studying the lives of Millennials who live with their parents. Of the 721 young adults who participated in the survey, 70% reported being satisfied or very satisfied with their lives while living at home. The survey responses often told a story of mutual reliance: with parents and their adult children supporting each other financially, emotionally and in the running of the household. For example, 85.7% reported receiving emotional support from their parents, and 88.6% reported giving help with housework and maintenance.

Survey respondents’ did also discuss some of the negatives of co-residence, namely a decreased sense of independence, which had knock-on effects on some of the respondents personal lives. One interesting element of the report focuses on the extent to which these young adults actually felt like adults, with some participants identifying as such, some having mixed feelings, and some not viewing themselves as adults at all. This raises questions as to whether milestones like moving out of the family home, which are traditionally seen as important steps in the transition towards adulthood, are critical to young people’s personal development. If this is the case, co-residence might be contributing towards the infantilisation of younger generations.

What should we take from this report?

The conclusion that should be drawn from GenY at Home’s study is that the increasing trend towards co-residence between young adults and their parents is a much more nuanced phenomenon than has been previously supposed.

The economic reasons behind co-residence are sound: it makes total economic sense for young people to choose to continue living in the family home, where they have that option, given the harsh set of financial circumstances they are facing. Moreover, much of the negative stereotyping around co-residence can be dispelled: younger people who live with their parents are usually engaged in a relationship of mutual support, so hindrances to emotional development are minimal. However, questions do arise around how important a sense of “adultness” is to younger people, and whether or not this sense of adulthood can be satisfied by the co-residence model.

For a country like the UK where co-residence is on the rise, the conclusions drawn by this report give us reason to be optimistic. Co-residence between the generations seems like it could form part of a sustainable response to the UK housing crisis, allowing younger people to save their income without necessarily compromising their wellbeing.