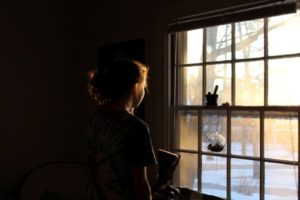 One in four teenage girls and one in ten teenage boys display symptoms of depression at age 14 in the UK, according to new research from the UCL Institute of Education and the University of Liverpool. How worried should we be about the next generation’s mental health?

There appears to be something approaching a consensus that our society should pay more attention to the cost of poor mental health, yet robust statistics on mental health are notoriously lacking. However, something which has been established through previous research is that half of all people who will experience a mental health problem in their lives have already displayed symptoms by the age of 14, so understanding the mental health of adolescents is very important.

This new piece of research took advantage of the Millennium Cohort Study, a longitudinal survey which is monitoring the circumstances of a group of roughly 17,000 young people who were born at the turn of the Millennium throughout the rest of their lives. Part of the questionnaire which the survey uses collects data on the mental health of the participants, and also asks their parents (who are included in each wave of the study while they are still children) whether they thought their children were showing any symptoms of mental health problems.

The detailed findings of the research were very interesting. It appears that boys and girls display very similar levels of depressive symptoms until the age of 14, at which point girls begin displaying them in significantly larger numbers. Another important finding was that the parents in the study appeared to significantly underestimate their own children’s levels of depressive symptoms once they reached adolescence, which suggests that parents may not actually be particularly effective judges of whether their children are experiencing difficulties or not. Potentially, this could mean that it would be valuable to educate parents about the risks of their children developing mental health problems in order to help those adolescents who need treatment to access it more quickly.

Measuring mental health across time within a population is fiendishly difficult, for a number of reasons. Firstly, society’s understanding of mental health has changed greatly over time; homosexuality used to be regarded as a mental illness in many countries, to take a high-profile example, so a comparison over a long period of time would need to take account of that. Secondly, it is also very difficult to distinguish between a genuine change in the level of mental health problems and the fact that people may be more aware of what constitutes a mental disorder, which could lead more people to say that they have experienced one than would have been the case in the past.

These are two of the reasons why simply comparing something like the proportion of people who have been diagnosed with a mental health problem over time would be misleading; it seems there is a need for more in-depth analysis of some of Britain’s other longitudinal cohort studies in order to try to get at a definitive answer to this question, but for the moment this remains an area which is significantly under-explored.