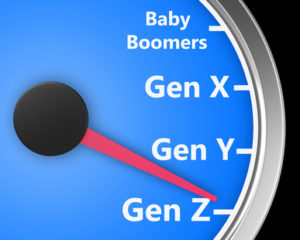 The BBC has just reported the results from the largest-ever survey of people who belong to Generation Z in the UK (the generation after the Millennials, whose members are currently aged under 22), which has found there is a dramatic disconnect between what this generation thinks and feels and how older generations feel about them. What did the survey show?

The BBC commissioned polling company Ipsos MORI to undertake this survey, which involved interviewing a representative sample of 3,007 UK adults aged between 16 and 65 earlier this year. There were specifically interested in two things: firstly, how did Generation Z, the youngest members of the sample, feel about various issues to do with their own lives and broader society, and secondly, how did older generations feel about Generation Z?

The results revealed a striking lack of agreement between the different generations. When Generation Z was asked what would make them happiest in life, the majority said it would be having a job that they love, followed by having a family with kids. However, when members of Generation X and the Baby Boomers were asked what was most important to Generation Z, only 1% said it was having successful job or a happy family; the most common answer they gave was that being famous and getting on TV was the most important thing for Generation Z.

Similarly, when the Generation Z respondents were asked what the thing they have already in their current lives is most important to them, 44% said it was their families. By contrast, Baby Boomer and Generation X participants both mistakenly believed that Generation Z would say their phones and social media profiles were the most important things they currently possessed.

When the different generations were asked about some of the wider issues affecting British society they displayed similar differences of opinion, although there were also some slightly surprising similarities. For instance, when asked what their top priority was for government all generations said improving the NHS, and the top three answers for all generations were improving the NHS, preventing acts of terrorism and making Britain’s economy work after Brexit.

The BBC has aired this issue in a programme called “We Are Generation Z” (available to view until 29 October 2017).