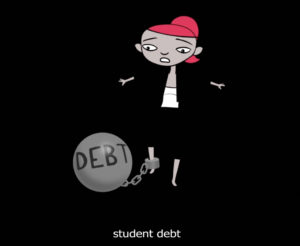 The Conservatives lost out by an enormous margin to Labour among Millennial voters in the general election earlier this year. At their annual party conference, they appear to have begun a charm offensive to try to regain some of the ground they’ve lost, starting with new policies on university tuition fees and housing which are designed to appeal to young people. Will the policies they are proposing make a real difference to young people’s lives?

Somewhat unexpectedly, tuition fees became a totemic issue in the general election, as Labour’s pledge to completely abolish tuition fees appears to have kicked off a debate which is still ongoing about the fairness of England’s higher education funding system.

The Tories, who up until now have remained steadfast in their support for allowing universities to charge fees of over £9,000 per year, have now announced a variety of moves which are designed to try to take some of the political heat out of this issue. Firstly, they have announced that the current maximum level of fees will be “frozen” at £9,250, rather than being allowed to rise to £9,500 in 2018/19. Secondly, the repayment threshold – the level of earnings above which graduates have to start making repayments on their student debts – will be increased from its current level of £21,000 to £25,000. Thirdly, they have indicated that they will look at other ways of making it cheaper for students to study at university, for example by encouraging universities to offer condensed two-year courses or compelling them to vary the prices they charge for students doing different degrees.

Assuming that we can take these announcements at face value, what impact are they likely to have on young people? To begin with, it’s important to remember that the devil is always in the details: the “freeze” on tuition fees only cements them at their present level for an unspecified period of time (they went up to £9,250 only last year, having previously been fixed at £9,000). It’s also unclear how this announcement will relate to the government’s longstanding plans to institute the new Teaching Excellence Framework (TEF), which has been being implemented in stages over the past couple of years. The ultimate aim of the TEF is to incentivise universities to offer better-quality teaching by permitting those that do to increase their fees further (up to the level of inflation).

The increase in the earnings threshold is also only necessary because the government has reneged on its original promise that the threshold would always rise in line with inflation. Nevertheless, this is, in effect, a targeted tax cut aimed at young voters that will put hundreds of pounds of extra money in the pockets of graduates. For example, somebody who earns £25,000 per year will save £360 next year compared to what they would have paid this year, and if the government decides to restore the link between the earnings threshold and inflation then this saving will be compounded in future years (how the government will ultimately pay for this change is another unanswered question). However, it’s also worth noting that a side-effect of raising the repayment threshold is that more graduates will end up making repayments for the whole of the 30-year repayment period (especially as inflation has pushed up the loan’s interest rate), so their odds of ever completely paying off their debt have actually worsened.

When it comes to housing, the Conservatives also pledged at their conference to spend an additional £10 billion on the Help to Buy scheme, which subsidies the cost of getting on the housing ladder for first-time buyers. The goal is that this should enable an additional 135,000 first-time buyers to buy their own homes.

This announcement is considerably less welcome than the one on tuition fees. While Help to Buy has enabled a (relatively small) number of first-time buyers to get on the housing ladder, Shelter have demonstrated that it was responsible for pushing up the average house price by over £8,000 for everyone else. This is not to mention that, given that the government is still pursuing public sector austerity, presumably the money which is used to pay for it will have to come through making deeper cuts elsewhere. As researchers at the LSE have shown that Help to Buy purchasers are disproportionately from well-off backgrounds (and could probably have got on the ladder without using the scheme), this may well create a regressive transfer of public resources that benefits the middle-classes. There is no doubt that Britain’s housing crisis needs to be taken seriously by policy-makers, but policies which have an inflationary effect on house prices are clearly not the right answer.