Scientists have produced a new warning about the possible future impact of climate change on human populations, reports David Kingman, but is their pessimism overstated? 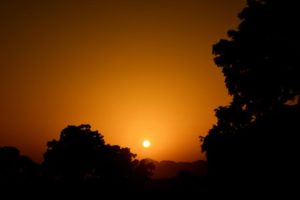 A group of scientists have warned that climate change could be responsible for an additional 152,000 deaths per year in Europe by the end of this century, in a new paper which was recently published in the Lancet Planetary Health Journal.

The team of researchers at the European Commission’s Joint Research Centre who authored the study estimate that extreme weather events could be responsible for 50 times more deaths than at present. Virtually all of them would be caused by heat waves, the impact of which will be felt most strongly in southern Europe.

These additional deaths will materialise in a number of different ways. The researchers estimate that deaths caused by extreme weather events may increase from 3,000 a year between 1981 and 2010 to 152,000 between 2071 and 2100, and there will also be a large increase in deaths caused directly by coastal flooding, from an average of six victims per year at the beginning of this century to around 233 per year by the end of it.

Another way in which the European Commission researchers expressed the impacts of climate change is that they estimate two-thirds of Europe’s population will be affected by extreme weather events such as storms and floods by 2100, whereas only one in twenty Europeans were in 2000.

This research used records of the seven most dangerous types of climatic events (heat waves, cold snaps, wildfires, droughts, river and coastal floods and windstorms) that took place between 1981 and 2000 to estimate the current levels of vulnerability experienced by people living in different places, and then made projections of both how the populations of these areas are likely to change over the rest of this century and how forecast increases in climate change are likely to affect the incidence and severity of these environmental problems.

Since the study was published, some climate change researchers have argued that the assumptions which the European Commission researchers fed into their model were excessively pessimistic. The authors assumed that greenhouse gas emissions would continue rising more or less unchecked from their current levels, a situation which would lead to average global warming of three degrees centigrade by the end of the century from levels in 1990, and also that little in the way of mitigation and adaptation would occur to contain the effects of climate change.

This approach was criticised by climatologists from Seoul National University in South Korea (in a piece which appeared alongside this study in the same journal), who argued that the study had ignored future generations’ ability to adapt their lifestyles to changing weather patterns in order to become less vulnerable. It is also worth pointing out that the Paris Agreement on Climate Change, which was agreed last year, pledges its signatories to keep global warming “well below” two degrees centigrade above pre-industrial levels; clearly, the European Commission researchers have assumed that this target won’t be adhered to.

These predictions of the possible effects of climate change represent a worst-case scenario. Yet they are a sobering reminder of the risk which we are in danger of passing on to future generations if those of us who are alive today don’t live up to our responsibilities to pass on the planet in at least as good a condition as we found it in.