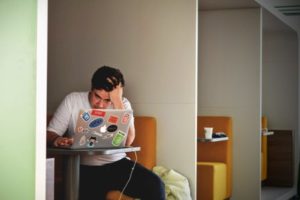 The student loan system in England has become significantly more regressive (i.e. proportionally more disadvantageous) towards poorer graduates since the repayment threshold – the level of earnings at which graduates begin making their repayments – was frozen in 2015, according to a new analysis of higher education finance by the Institute for Fiscal Studies (IFS), which comes at a time of increasing public debate about the amount of debt that students are now being expected to shoulder in order to attend university.

The headline finding from the IFS research was that the overall level of debt which the typical student will now acquire in order to complete a three-year university course has broken the £50,000 barrier. This situation has transpired because of three factors: the increase in tuition fees to £9,000 per year for virtually all higher education courses, the change from maintenance grants to maintenance loans which was implemented last year, and the recent rise in interest rates, which means that current students will accrue interest at a rate of 6.1% while they are still studying (as the formula on which it is calculated is RPI inflation plus 3%).

The key to understanding England’s higher education finance system is to think about it as a tax which is disguised as a loan, as opposed to how we normally think about large debts such as mortgages. Although students will acquire these large debts, neither the amount that they owe or the interest has any bearing on the amount they have to pay back each month; because the loans are “income-contingent”, the debtor only has to repay 9% of their salary above the repayment threshold (which is currently set at £21,000), and under the present terms and conditions all outstanding debts are supposed to be written off after 30 years. The IFS predicts that this means that only a quarter of students (the highest earners) will pay off their debts in full.

Despite income-contingent tuition fees having been in existence for over ten years, these facts are still poorly understood, with even the BBC having published an article in the past week which completely misrepresented how the system works.

Criticism of the current system has intensified in recent months, following Jeremy Corbyn’s decision to make abolishing tuition fees one of the major planks of Labour’s election manifesto (although whether or not this actually had a large effect on the outcome is still being debated). Labour are now suggesting that if they get into power they would wipe out existing student debts; meanwhile, no less a figure than Lord Adonis – who as an education minister under Tony Blair originally created the system of income-contingent student loans – has publicly argued that it should now be abolished, claiming that he never envisioned the amounts students would need to borrow would get so high. IF are currently running a campaign, Parents against student debt, which is attempting to mobilise angry parents against the current student debt system.

However, the government has largely continued to maintain its defence of the current system in the face of this mounting criticism. Two arguments, in particular, are often made to support it, which the IFS called into question in their report: firstly, that the trebling of tuition fees enabled the government to increase university funding between 2010 and 2015 when otherwise it would almost certainly have fallen victim to austerity, and secondly, that the new system is actually more progressive than the previous one because low-earning graduates are allowed to earn more before they have to start making repayments (and also because the higher interest rates extract more repayments from high-earning graduates than under the system they replaced).

In their analysis, the IFS demonstrate that while there are elements of truth to both these arguments, they also don’t tell the whole story. With regard to the first one, the IFS point out that while funding per student has increased by around 25% compared to the pre-2012 system, there is huge uncertainty surrounding how much the newer model will cost the public purse because it depends upon the amount of student debt which is eventually repaid. The IFS’s central projection is that nearly a third of all the current student debt (31%) will never be repaid, but they emphasise that if average graduate earnings are 2% lower in the long run than this projection allows for, then the government’s cost will rise by an additional 50%. This risk is borne entirely by future generations of taxpayers.

They also point out that while the new system appears to have provided additional funding it has also created a perverse incentive for universities to enrol more students on the types of courses which are relatively cheap to provide, such as the arts and humanities, rather than on courses which are more expensive because they require a lot of technical equipment such as laboratories, as the fee income is practically the same from every student studying every course at an English institution. This means that higher tuition fees have not assisted with the government’s priority of attracting more people to studying STEM subjects (Science, Technology, Engineering and Mathematics).

Regarding the second argument, the IFS point out that while the post-2012 system was originally somewhat more progressive than the one it replaced because of the higher repayment threshold, this effect has now been almost entirely reversed by the government’s decision in 2015 to freeze the repayment threshold at £21,000 in cash terms, rather than allowing it rise each year in line with inflation. This decision – which was strongly criticised at the time by commentators such as Martin Lewis – demonstrates how vulnerable graduate borrowers are to having the terms of their loans altered retroactively in a way that wouldn’t be legal for commercial lenders.

Tuition fees have clearly become a mainstream political issue again, which is likely to lead to more tinkering with the system, but whether we get a workable alternative out of it which is fair – to students, graduates, taxpayers and future generations – will very much remain to be seen.