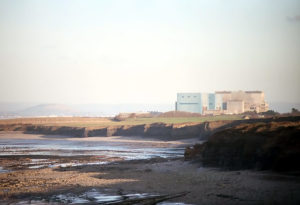 A National Audit Office review of the Hinkley Point C deal agrees with the conclusion of IF’s previous research that it is likely to represent very poor value for taxpayers’ money. David Kingman reports

The deal which the government has signed to build Hinkley Point C – the UK’s first new nuclear power station in a generation – has been branded “risky and expensive” by the National Audit Office (NAO) in a new report which examines the likely value for money of the scheme. This finding chimes with the arguments that IF made in our 2016 research report Toxic Time Capsule: Why nuclear energy is an intergenerational issue, where we demonstrated that the government’s plan to replace a significant number of Britain’s decaying power stations with new nuclear generating capacity is likely to leave future generations footing a huge bill.

The basic elements of the deal are that the Hinkley Point C project is currently expected to cost around £18 billion to build (in 2016 prices). Rather than investing up-front capital itself, the UK government has forged a deal with the French national energy company EDF and two Chinese nuclear power firms to take on the project and construction risk. In return for not funding the project’s construction, the UK will buy energy at a fixed strike price of £92.50 per megawatt hour (in 2012 prices) throughout the first 30 years of the plant’s existence.

The level of the strike price has been one of the main bones of contention since the deal became public, with the government’s critics (including IF) arguing that it makes the deal significantly poorer value for money over the lifetime of the plant than investing the same amount of money in renewable energy would have been, because alternative sources of power to nuclear have shown an impressive fall in costs over recent years and are expected to become relatively cheaper still in the future. The more that the cost of alternative sources of energy diverges from the fixed strike price, the worse value the project will be for future generations of British taxpayers.

Throughout the genesis of the Hinkley Point C project the government has maintained that it offers better value for money than alternative sources of energy would have done. However, according to the NAO’s trenchant summary the Department for Business, Energy and Industrial Strategy’s own internal modelling of its future costs has always indicated that the project’s value for money was “marginal and subject to significant uncertainty”. The government has also responded to criticism of the deal in the past by arguing that it will make future nuclear power projects cheaper, as they can copy the same business model and use the same technology, and it will have strategic benefits for the UK by furthering the links between our nuclear industry and China’s.

However, the NAO argues that these strategic benefits are also hugely uncertain, as the government has not laid out a specific plan for how they will be realised. It also warns that there is no guarantee that the operating company which will run Hinkley Point after it has been built will not request further financial assistance from the UK government, especially since EDF’s other projects in France which involve the same reactor design are severely behind schedule and over budget.

The NAO’s final conclusion is that it will be impossible to tell whether Hinkley Point represented value for money compared to the alternatives until decades after it is built, as this will depend on future developments in energy prices and technology and whether the various parties involved in the deal manage to keep it on course.

However, the tenor of the report is that the government has left future generations with a very substantial risk that it won’t prove a good deal, as the NAO’s head, Amyas Morse, argues:

“The Department has committed electricity consumers and taxpayers to a high cost and risky deal in a changing energy marketplace. Time will tell whether the deal represents value for money, but we cannot say the Department has maximised the chances that it will be.”

Image: The headland at Hinkley Point with the current power stations visible in the background. Reproduced under the terms of Creative Commons Attribution Share-alike license 2.0, via Wikimedia.