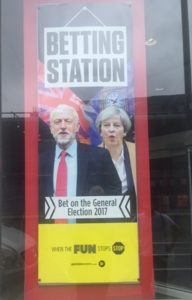 Age has become “the new dividing line” in British politics, according to the post-election exit poll that was published last week by polling company YouGov. This was a significant report because it used data that had been gathered from a sample of over 50,000 British adults, making it one of the largest political surveys ever undertaken in the UK. It produced a number of interesting insights into how different groups voted at the 2017 general election, including drawing attention to just how polarised the different generations are when it comes to who they vote for.

The results of YouGov’s survey found that young people overwhelmingly favoured Labour over all the other parties: Jeremy Corbyn’s party scored a vote share of 66% among 18–19 year old voters, 62% among 20–24 year olds and 63% among 25–29 year olds. By contrast, the data suggest that the Conservatives were the most popular party among older age groups, winning 47% of the vote among 50–59 year olds, 58% among 60–69 year olds, and 69% among the over-70s.

These data lead to two interesting observations. Firstly, it seems clear that people become increasingly likely to vote Conservative the older they get: YouGov estimate that for every 10 years older a member of the electorate gets the likelihood of them voting Conservative rises by 9%. The “crossover point” at which a voter became more likely to vote Conservative than Labour at the 2017 election turned out to be 47, whereas YouGov’s polling before the campaign had indicated it would be 34 because their data at that time suggested that many more younger voters would abandon Labour than ultimately proved to be the case.

Secondly, there was a striking relationship between age and education in determining how people voted. Just as was the case with last year’s EU referendum, education was a very strong predictor of how people voted, although not in the way that you might expect. YouGov’s data suggest that the Conservatives hoovered up 55% of votes among the least-qualified (people whose highest qualifications were GCSEs or below), while they won only 32% of voters who had a degree or post-graduate qualifications, 49% of whom plumped for Labour. In other words, the Tories have become the party of the proletariat, while Labour can now claim to represent the intelligentsia, which is a complete reversal of both parties’ respective historical roles as the party of the establishment on the one hand and parliamentary wing of the trade union movement on the other. Clearly, there is a very close relationship between age and education – almost half of today’s young adults attend higher education compared to only about 5% in the 1950s – so it isn’t surprising that young people leaned so heavily towards the left.

Much has been made since the election of the rise in turnout among young voters – the so-called “youth surge”. However, the YouGov data suggest that while there probably was a youth surge, the turnout gap between younger and older voters remained significant. It’s worth pointing out that turnout is one of the most difficult things to measure using exit polls because it’s harder to get people who just aren’t interested in politics to talk to pollsters, and also because people don’t always tell the truth about whether they voted or not after the fact. However, bearing these caveats in mind, the YouGov data suggest that only 59% of 20–24 year olds voted, compared with 84% of over-70s – a 25% gap.

These data raise some fascinating questions about the future of British politics. For example, will the Millennials shift to the right as they get older, or will the overwhelming preference for the Tories among today’s older generation go into reverse as their children and grandchildren age? Will they start voting in higher numbers as they get older, or is voting itself likely to go out of fashion? And are we destined to have an electorate which is increasingly divided between the highly educated and everyone else, where the two groups will inhabit almost separate worlds and see every political issue from opposing vantage points?

The 2017 election may be history, but the divides which it helped to expose should be of great concern to us all.