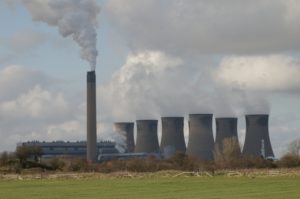 As part of its efforts to combat climate change under the 2008 Climate Change Act, the UK government is committed to phasing out coal as a power source in favour of alternatives which produce lower carbon dioxide emissions. Britain’s progress towards that goal reached an important milestone last week, as on 22 April the country marked the first day when no electricity was generated using coal since the Industrial Revolution.

As most people know, the UK was the first country in the world to be revolutionised by the impact of coal-fired power in the 18th and 19th centuries. The world’s first coal-fired electricity generator was demonstrated to the public at Holborn Viaduct in London in 1882, and until very recently coal remained the dominant source of power that was used to provide the UK with its electricity. However, it is now government policy to completely phase out all coal-fired power generation by the year 2025 in order to reduce our carbon dioxide emissions, which so far has seen all but eight of the UK’s coal-fired power plants bring their operations to a close.

So where is our power coming from? For anyone who wants to find out how much energy the UK’s national grid is carrying at any given moment, and which sources it was generated by, a useful website is: www.gridwatch.templar.co.uk

This source provides a powerful indication of the way in which the UK’s energy supply has changed over recent years, as on any given day the three largest sources of energy are likely to be gas, nuclear and wind, often with supplementary contributions from solar and biomass. On 22 April – the day without coal – roughly half the UK’s energy was supplied by natural gas and another quarter by nuclear. As recently as 2015, coal was still providing nearly a quarter of the UK’s total energy over the course of the whole year, but that fell to just 9% in 2016 because of plant closures, and is set to be even less in 2017.

This is very positive news for younger and future generations, to whom the present generation owes a moral obligation to pass on the natural environment in a condition which is as good as, or better than, the one that they themselves inherited. However, given that the bulk of our energy is still being supplied by natural gas (which is a fossil, albeit one that is generally considered less harmful than coal) and nuclear energy (which creates the long-term problem of dealing with nuclear waste), there is still plenty of work to do before the UK’s energy supply becomes truly sustainable. This is not to mention that the UK’s serious issue with another environmental problem, airborne pollution, remains a major challenge.

Yet it’s hard not to see this story as a cause for optimism if you believe in intergenerational justice, because it demonstrates that governments are capable of implementing policies which are beneficial in the long term if campaigners put enough pressure on them to ignore short-term interests. Twenty or thirty years ago, removing coal from the UK’s energy supply would have been virtually unthinkable, but now decarbonisation has become a policy orthodoxy which is supported by all three of the UK’s main parties.

If it was possible to achieve a long-term policy win on an issue which is as economically sensitive as the UK’s energy supply, it raises the question of whether the same will could be marshalled to solve some of society’s other major intergenerational challenges.