David Kingman looks at the rise of France’s “Génération Identitaire” 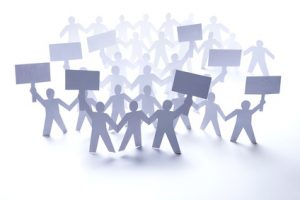 French citizens will go to the polls on 23 April for the first round of this year’s presidential election. Coming hot on the heels of Brexit and Trump, commentators from around the world have been eagerly anticipating the vote for months because the fact that Marine Le Pen – leader of the right-wing, anti-immigrant and anti-EU National Front – appears to have established a commanding lead in virtually all of the polls suggests that there could be a third major electoral triumph by a populist, right-wing political movement in less than 12 months.

However, tempting though it may be to look for trends between events in different countries, it’s important to remember that the differences are normally greater than the similarities. One particularly arresting difference between the Brexit and Trump movements and the French election is the surprising level of support that Le Pen enjoys among France’s Millennial voters, which stands in sharp contrast to the general level of disdain that young people showed right-wing populism in Britain and the USA. Why have France’s young people turned to the right?

French electoral polls have consistently found that support for Le Pen is very high among voters aged 18–24 and much lower among retirees, which is almost the exact opposite of what happened among Brexit and Trump supporters. One recent survey suggested that the National Front is the most popular party among French voters in both the age groups 18–24 and 25–34.

These age groups have also made their support for the populist right highly visible by forming campaigns which take advantage of new media to broadcast their message. The largest such group, the France-based but Europe-wide Génération Identitaire, has performed publicity stunts – such as occupying mosques – which it publicises on social media; it can lay claim to 120,000 fans on Facebook, which is more than twice as many as the official youth wings of France’s two largest political parties, the Socialists and the Republicans, combined.

The success of what are likely to be France’s two most popular political websites, www.fdesouche.com and www.egaliteetreconciliation.fr, in attracting huge volumes of traffic, has also been linked with their appeal to younger voters who are more comfortable with using the internet to find points of view that aren’t acceptable to the mainstream media.

Broadly, the message espoused by Génération Identitaire and similar groups on the French far right is that France’s cherished national identity as a secular, liberal democracy with a distinct culture is being endangered by the country’s growing Muslim population. A recent BBC article (see link above) quoted a 26 year old campaigner who was handing out leaflets for Génération Identitaire:

“What we don’t want is the replacement of our values by Islamic ones… France is historically a Christian country. I’m not criticising anyone. What happens in your land is your business. What happens here is ours. We are against colonisation, and this is why we don’t want the same phenomenon to happen in reverse.”

To such voters, it’s easy to see why the National Front’s rhetoric – which has included comparing the sight of Muslims praying in the street in France to the Nazi occupation – would sound attractive.

Most attempts to analyse support for France’s National Front have concluded that young people – much like many of the party’s older supporters – are primarily interested in rebelling against a mainstream elite which has broken the promise of providing everyone with a good job and a future they can look forward to. Youth unemployment in France was running at almost 26% in late 2015 (the most recent figure available), almost twice as high as in the UK, and many young people who are employed find it extremely difficult to get permanent work because the French economy is characterised by high levels of temporary employment.

It has also been suggested that the young in France find the National Front less objectionable than older generations do because they are too young to remember what it was like under the leadership of its founder, Jean-Marie Le Pen, who has been found guilty of inciting racial hatred on multiple occasions; his daughter has officially expelled him from the party and softened some of her rhetoric as part of a concerted effort to “detoxify” the National Front’s brand.

Of course, it remains to be seen how much of the young’s support for Marine Le Pen will translate into actual votes on election day (and even if she wins the first round, she will still have to win a run-off election under the French system, which most polls predict she will lose). Nevertheless, this development suggests the dangers of young people feeling their needs aren’t being listened to by mainstream politicians: in France it seems to be pushing them towards extremes.