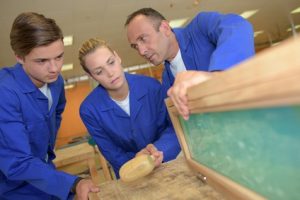 Despite the need for better vocational training routes for young people, the government’s plan to fund millions of new apprenticeships by charging firms a levy risks doing more harm than good by subsidising low-quality training programmes that would have taken place anyway – this was the stark warning that was delivered by a recent report from the economics think tank the Institute for Fiscal Studies (IFS).

This report raises important questions about whether the apprenticeship levy will actually do much to benefit young people.

It has long been acknowledged that one of the biggest problems affecting England’s education system is the enormous gap that exists, in terms of both resources and prestige, between what is available to young people who attend university and what is available to their counterparts who opt to follow a vocational route instead. Young people are often poorly advised at school about how to acquire vocational qualifications – which can lay the foundations for a successful future career – while at the same time Britain’s private sector employers have a much poorer record than their equivalents in other European countries (Germany and Austria are the two outstanding examples) at providing genuinely high-quality, structured training programmes for their young workers. Given that there is a strong relationship between the skills of the workforce and how productive an economy is, England’s poor vocational education may also be partly to blame for the “productivity gap” (between Britain and other countries) that has opened up in recent years.

As a remedy for these various problems, the Conservative Party promised to create 3 million new apprenticeships (full-time jobs with an accompanying skills development programme, which includes both on- and off-the-job training) in their manifesto for the 2015 general election; at that year’s Budget they announced that these would be funded by a new “apprenticeship levy”, an additional tax of 0.5% on employers which have total wage bills of over £3 million per year (i.e. large firms). The government has agreed to directly fund most of the off-the-job training costs for apprenticeships, up to certain price caps, and has also given all public sector employers that have at least 250 staff a duty to create a certain number of new apprenticeships each year. Overall, apprenticeship funding is set to increase by £640 million in cash terms between 2016–17 and 2019–20.

In its report, the IFS assesses whether the potential benefits of the apprenticeship levy are likely to offset its drawbacks, which they argue are considerable. Firstly, the IFS argues that increasing the level of subsidy which is available to firms for offering apprenticeships will incur significant “deadweight” costs; i.e. it will encourage employers to simply re-label training schemes that they would have offered anyway as apprenticeships in order to take advantage of the money on offer.

Secondly, the duty which the government has placed on public sector employers to create apprenticeships has been imposed with a one-size-fits-all design, which pays too little attention to the circumstances of individual employers. While it may lead to a headline increase in the overall number of apprenticeships, it will not necessarily improve the quality of public services and may simply lead to young people being employed unproductively.

This relates to the third, and arguably most substantive criticism of the apprenticeship levy, which is that it will simply drive the expansion of apprenticeships at the expense of quality. In 2015, an Ofsted report into apprenticeship schemes found that too many were failing to equip the people who completed them with adequate skills, which suggests that just creating more apprenticeships under the current model will not help young people as much as it could.

Overall, the amount of attention which youth skills are now receiving is undoubtedly a good thing, but it remains to be seen whether the policies that have been enacted will really lead to a  genuine improvement in either vocational education or economic productivity.