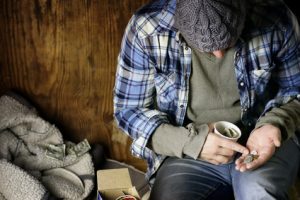 Here’s an interesting question: how much has the official poverty level changed in the UK over the past ten years?

Given that reducing poverty is something, like motherhood and apple pie, that practically all politicians say they are in favour of, you might hope it would have gone down. However, that isn’t the case: a new audit of poverty in the UK which has been produced by the Joseph Rowntree Foundation indicates that the level of poverty has actually remained almost exactly the same over the past ten years, with about one in five people still living in low-income households.

The UK has endured a severe recession followed by a half-decade of public sector austerity measures, so the fact that poverty seems not to have got dramatically worse during this period could almost be seen as progress. However, what the JRF’s review reveals is that the types of households which tend to live in poverty did change significantly during this period, in ways which have significant intergenerational implications.

The fact that the UK’s population has grown steadily over the past decade means that the absolute number of people living in low-income households has risen by about 1.5 million people. JRF’s analysis shows that this change has not been distributed evenly across different age groups: the number living in poverty among the over-65s actually fell by around 400,000 people, while all of the increase happened among those who were of working age.

To a very large extent, these patterns can be explained by two factors. Firstly, pensioner incomes have been protected by changes in social policy during this period, especially the post-2010 creation of the “triple lock” for the state pension. At the same time, the poorer cohort of older pensioners has been reaching the end of their lives and been replaced by younger Baby Boomers, who tend to have bigger pension savings. Secondly, what JRF’s research clearly emphasises is that if you look at poverty on a post-housing costs basis, the recent shift towards private renting has been absolutely crucial, which is a trend that mainly affects younger households. They observe that:

Retired households are much more likely to be owner-occupiers than private renters – and many of them will own their properties outright rather than with a mortgage, so they have largely been shielded from these trends. JRF’s findings paint a worrying picture of how poverty could increase, rendering society more unequal, if average rents don’t become more affordable to workers.

A related problem which JRF’s research underscores is that while the UK arguably no longer has a serious problem of unemployment, with the number of adults in work being at a record high, the number of adults in working poverty is also at a record high of 3.8 million. Although a large amount of media attention still focuses on negative stereotypes of long-term unemployment, in actual fact people in families where no-one works are a minority of those living in poverty. Just 45% of those living in poverty are in workless households, and of this 45%, 12% are pensioners, 17% consist of families with disabled members, and 6% are lone-parent families, who usually face practical challenges to working. Barely one in ten people in poverty belong to other groups, including workless single adults.

The worrying fact about poverty in contemporary Britain is that a vital part of the economic bargain which underpins society – work hard and you can afford a decent lifestyle – appears to have broken down for millions of people. Can we expect them to still feel they have a stake in society when this is the case?