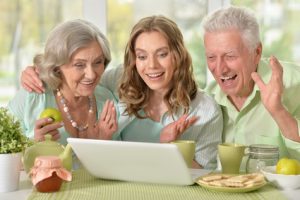 Living in the same home as their adult children has a positive impact on the mental health of older adults, according to the findings from a recent study that was published in the academic journal Social Science and Medicine.

The research paper, entitled Under one roof: The effect of co-residing with adult children on depression in later life, was produced by Emilie Courtin and Mauricio Avedano, a pair of researchers from, respectively, the London School of Economics (LSE) and King’s College London.

Their project aimed to investigate whether there was a causal relationship between older peoples’ risk of suffering from depression and the presence of adult children who are living in the same home as them. They did this by analysing three waves of data (2004–2010) from the Survey of Health, Ageing and Retirement in Europe (SHARE), a pan-European survey of 50,043 adults. The incidence of depression among older adults was assessed using a tool called the Euro-D scale of depression; the statistical modelling they undertook suggested that the incidence of living with adult children was strongly associated with a decline in depressive symptoms.

The authors concluded that “in the context of high unemployment rates during the Great Recession in Europe, increased intergenerational exchange between adult children and older parents in the form of co-residence had positive mental health effects on older parents.”

Depression is recognised as being a significant medical problem among older adults; according to a 2011 study that was published in the British Medical Journal, “depression in later life, traditionally defined as age older than 65, is associated with disability, increased mortality, and poorer outcomes from physical illness.” In addition to causing older people and their families significant emotional distress, it also exacerbates the financial strains facing the health and social care systems. Therefore initiatives which would improve older peoples’ mental health are clearly worth pursuing.

One of the major consequences of Britain’s housing crisis has the been the dramatic rise in the proportion of young adults who have continued to live in the parental home for longer than previous generations used to. The ONS has shown that between 1996 and 2015 the number of 15–34 year olds who lived with their parents rose from 5.8 million to 6.6 million (an increase from 36% to 40% of this age group).

This is generally perceived to be a bad thing, not least because surveys of young adults show that the vast majority of them want to own their own homes one day; many won’t engage in important adult transitions, such as forming permanent relationships or having children, while they still live with their parents.

Yet maybe our attitudes towards home-ownership are what needs to change. With an ageing population, and an extremely high likelihood that the housing supply will prove inadequate for decades to come, a shift towards more intergenerational living – in which it becomes commonplace for adult children to remain in the parental home and bring up their children there – would confer a number of important benefits upon society.

As the doctor Atul Gawande observes in his book on ageing, Being Mortal, it is more or less only in the developed West that adult children are expected to make a permanent break away from their families, or where it is considered more normal to hand the care of an ageing parent on to a hired professional rather than providing it within the family itself. If one of the consequences of Britain’s housing crisis is that it results in millions more families all living together under one roof, then, this paper suggests, such a situation might actually have some unanticipated benefits.