David Kingman explains the results of “Generations Apart”, IF’s latest research project, which measures the growth of age segregation in England and Wales 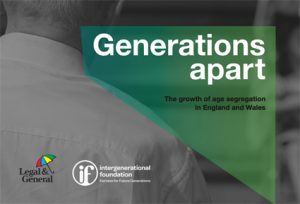 In the first of two blogs on “Generations Apart”, IF’s latest research report in partnership with Legal & General, which analyses the growth of age segregation in England and Wales, we explained why age segregation is important and gave a guide to the tools we used to try to understand it better. In this second part we present the main findings.

No country[side] for young men

Although the main focus of the project was to analyse age segregation at the level of individual neighbourhoods within big cities – as these are the places where most of the population lives – we also wanted to see how much age segregation there is on a larger scale between urban and rural areas.

Rather than using the techniques that were described in the previous blog (which are only useful for comparing small areas), this was done simply by analysing the median ages – the age that half the population are above and half are below – in different areas which are classified as “rural” or “urban” by the Office for National Statistics (ONS).

As we had anticipated, this showed that there is a stark divide between the age profiles of our towns and countryside, which is growing increasingly pronounced over time. Indeed, between 1991 and 2014 (the period covered by the study), the median age of rural areas rose twice as quickly as that of urban ones. The places that  the ONS classifies as “rural town and fringe” areas now have the oldest age profile, with a median age of 50, while in what they classify as “major urban conurbation[s]” it is only slightly over 35. The stark rural-urban divide is illustrated by the places which have the most extreme median ages. The study found that among the 7,201 neighbourhoods which the ONS divides England and Wales into, there are 487 where the median age is above 50, and 60% of these are found in rural areas; by contrast, there are 337 neighbourhoods where the median age is under 30, all of which are found in urban areas..

The growth of age segregation between rural and urban areas was mirrored at the micro-level within the large cities themselves. In other words, what we found was that not only has the country become increasingly divided between elderly rural areas and much more youthful urban ones, but that the old and young are also sorting themselves by age into different neighbourhoods within these urban areas.

This effect was found to be most striking for young adults (aged 18 to 34), who have become dramatically more likely to live in neighbourhoods that contain only other young adults, predominantly close to the centres of cities. Looking at segregation between all the age groups living in them as a whole, the two most segregated cities were found to be Cardiff and Brighton, while the least age-segregated was Wigan.

Can we solve our housing crisis?

Although this project wasn’t looking specifically at the causes of age segregation, there is a wide body of literature to suggest that segregation usually results from the functioning of housing markets. Certainly, the growing isolation of young people living near the centres of cities, and the rising numbers of children who live in areas with few older people, would appear to reflect the shift towards many more single adults and young families living in rental accommodation in inner-city areas when in previous generations they would have expected to suburbanise. It seems that the growth of age segregation can only be reversed if we make it easier for young and old to afford housing which is in the same areas.

The insurance firm Legal & General kindly agreed to sponsor this project by including it in their new series of Fluid Intelligence pamphlets – a set of thought-leading pieces of research which are designed to encourage greater debate about some of the big challenges affecting British society. Like IF, Legal & General are particularly concerned about the housing crisis facing Britain’s young people, so they contributed a series of recommendations for how it could be addressed which included not only the usual ideas (building more housing, reviewing the Green Belts), but also some more novel ones, such as making greater use of flat-pack housing which has been assembled in factories.

One thing is for sure: this project showed that age segregation has been steadily worsening for almost 25 years, so we shouldn’t delay in addressing it any longer if we want to bring the generations closer together in the future.

“Generations Apart” has been launched as a pamphlet in the Fluid Intelligence series sponsored by Legal & General [link]. To read the full in-depth research findings, you can also see the research report published by IF [link].