The latest issue of the Intergenerational Justice Review, just published, is entitled “Low Electoral Turnout among Young Voters” – a particularly topical subject in the light of the recent EU Referendum. Jörg Tremmel, one of the editors of IGJR and a member of the IF Advisory Board, tells us how it looks from his perspective in Germany* 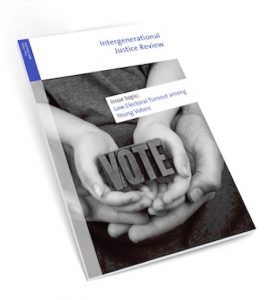 Although we won’t know the true figures until the British Election Study releases the results of their post-referendum survey in a couple of month’s time, it has been estimated that some 75% of voters aged between 18 and 24 voted against Brexit, and thereby chose to speak out in favour of the United Kingdom remaining in the EU.

Had only those under the age of fifty cast a vote, the Remain camp would have won by quite a large margin.

On average, those who voted Leave now have 16 years left to live, while those who opted for Remain may expect to live for another 69 years. In other words, the older voters have made a decision the consequences of which will not affect them for very long. They say that the young are the future – but the future young Britons wished for has just been deferred until… heaven knows when.

A young Briton rather bluntly puts it like this: “Brexit is a middle finger from the baby boomers to young people like me.” The results of this referendum will undoubtedly add fuel to the debate on “intergenerational domination”.

It rubs salt into old wounds. For example, the baby-boomer generation enjoyed free access to higher education – that is, to studying without tuition fees – only to introduce such fees after leaving university and entering into working life. In short, it has burned the ladder on which it has climbed upwards.

However, the youth must shoulder some part of the blame for Brexit, since their turnout rate was, in fact, considerably lower than that of older generations. To quote the Financial Times: “Had turnout been higher among younger people its influence would have been even greater, but as is usually the case, there was a slight general trend for turnout to increase in line with average age.”

It is noteworthy, however, that “Oxford and Cambridge, university towns with politically engaged students, had high turnout relative to age.” Oxford voted 70.3% to remain; Cambridge 73.8%.

So here is the lesson: there is no future for those who fail to stand up for it at the ballot. We can hope that the young will not give away their vote so easily as Britain moves forward.

And what’s more: they should speak to their grandparents in the run-up to important votes and explain their young point of view. “Call your Grandpa, next time” is what one wishes to shout to young Britons.

*Text originally written in German and translated by Markus Rutsche