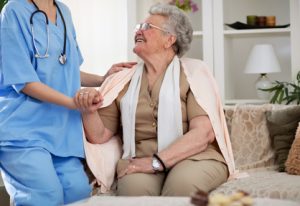 The cost to the NHS of so-called “delayed discharges” – when a patient (usually someone over 65) remains in hospital after their treatment has finished because there isn’t anywhere suitable to discharge them to – has spiralled to £820 million per year, according to a new report by the National Audit Office (NAO). Why has it got so high, and can anything be done about it?

There are currently “far too many older people in hospitals who do not need to be there”, according to the head of the NAO, Amyas Morse, who warns that “without radical action, this problem will worsen and add further strain to the financial sustainability of the NHS and local government.”

The report estimates that there are currently as many as 2.7 million hospital bed days a year being wasted across the NHS because of problems with discharging medically fit elderly people into more appropriate settings. This is significantly higher than the official figure of 1.15 million hospital bed days a year being wasted, which the NAO argues is an undercount because it only includes “delays after clinicians and other professionals deem a patient to be ready for discharge, and does not include all patients who are no longer in need of acute treatment.”

Minimising delayed discharges is supposed to be a top priority for hospitals. NHS guidance states that elderly patients should be moved out of hospitals as quickly as possible once they are deemed to be medically ready for discharge. Quite apart from the obvious issue of opening up hospital beds for new patients, there is a strong case for doing this in order to protect the health of the elderly patients themselves: the report contains an estimate that someone who is over 65 can lose up to 5% of their muscle strength during each day that they are bed-bound in hospital, while older people with weaker immune systems are more likely to catch dangerous hospital infections.

The report identifies a number of features within the healthcare system which often conspire to keep older people trapped in hospitals for longer than they need. The first problem is that there is a persistent lack of integration between the NHS (which is run centrally by the Department of Health and remains (mostly) free at the point of use) and social care (which is run by individual local authorities and is heavily means-tested). Since the Conservatives came to power in 2010, local authority social care spending has fallen by an average of 10% across England, and by as much as 20-30% in some areas because of government austerity measures.

This leads on to the second problem, which is the lack of resources within the social care system that would enable it to absorb older people with care needs more efficiently when they come out of hospital. The NAO observed that hospitals actually have a financial incentive to reduce delayed discharges, whereas social care providers do not, and in many parts of the country they are now so under-resourced and under-staffed (vacancy rates for homecare nurses are as high as 15% in some regions) that they simply cannot cope with having to help too many additional clients.

What are the answers?

Delays in discharging vulnerable elderly people from hospital clearly impose a huge physical, emotional and financial toll on the individuals concerned, their families and the NHS. The NAO has recommended a series of measures which it believes could help to remedy the situation, not least by placing a duty on NHS England and the Department of Health to break the trend of increasing delays as the population ages.

There are also a number of measures which individual hospitals and NHS trusts can implement to improve their own efficiency internally; the King’s Fund recently provided some interesting case studies of current initiatives in this area.

However, fundamentally it seems hard to see how this problem can really be solved as long as health and social care remain two separate systems which are run along largely independent lines; the Barker Commission on Health and Social Care recommended that the two systems should be fully integrated, but the government has so far rejected this proposal on a national level. However, with the news that Greater Manchester will shortly become England’s first city-region to effectively run its own NHS services, there is the prospect that the government’s urban devolution agenda may finally succeed in bringing the two systems together.