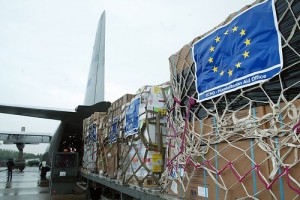 House prices paid by first-time buyers rose by almost 10% between March 2015 and March 2015, according to the latest house price data from the Office for National Statistics (ONS). With the referendum on Britain’s membership of the EU looming on 23 June, both sides in the debate have claimed that a vote to leave would have an impact on house prices.

So, could a vote to leave the EU help first-time buyers?

The Intergenerational Foundation is politically neutral in the debate on Britain’s EU membership; however, as we are very concerned about the housing crisis facing first-time buyers, the argument that a vote to leave the EU could affect them is worth addressing.

So far, a range of different economic projections has been produced which suggest that house prices would be likely to fall if Britain left the EU. On 13 May, the International Monetary Fund (IMF) published an official projection which showed that there could be “sharp drops” in house prices in the immediate aftermath of a Brexit vote, largely because it would undermine foreign investors’ confidence in the UK economy.

This warning was followed by another one on 19 May from the National Association of Estate Agents, which warned that the average homeowner would lose up to £2,300 on the value of their home over the next three years following a Brexit vote (or £7,500 in London), as they argued that uncertainty over the continued free movement of people into the UK would make foreign nationals less keen on buying property.

Finally, the gloomiest projection of all about house prices was contained in the Treasury’s official analysis of the economic impacts of a Brexit vote, which they published on 23 May. This claims that a Brexit vote would precipitate a twelve-month period of recession, during which UK economic growth would be depressed by between 3% and 6%, and over the next two years house prices would grow by 10% less than the Treasury expects them to under the status quo.

It is important to emphasise the following points about these projections. Firstly, they are only educated guesses about what might happen in the event of a Brexit vote – predictably, the Vote Leave campaign has strongly disputed them, making the counterargument that the economic weakness of the Euro area represents a bigger risk to Britain’s future economic growth than Brexit. For obvious reasons, the exact economic impact of a Brexit vote would depend hugely on the type of post-Brexit trade deal which the UK signs with the EU, as that impact would be highly sensitive to decisions about barriers to investment and freedom of movement.

Secondly, even though the majority of informed opinions appear to be arguing that a Brexit vote would produce lower house prices, there are also conflicting schools of thought about whether this would actually be beneficial or not for first-time buyers. Recently, when former Business Secretary Sir Vince Cable claimed that falling house prices following a Brexit vote would be good for housing affordability, Chancellor George Osborne argued that the economic uncertainty of Brexit would  actually harm first-time buyers by making it harder to get mortgages:

“In the long term, the country and the people in the country are going to be poorer. That affects the value of people’s homes… And at the same time, first-time buyers are hit because mortgage rates go up, and mortgages become more difficult to get. So it’s a lose-lose situation.”

Thirdly, in relation to the Chancellor’s argument, it’s worth emphasising that all of the projections which claim that a Brexit vote would reduce house prices also claim it would lower overall economic growth as well – which could well result in fewer jobs for young workers.

So, should young people plump for Brexit in the hope that it will make it easier for them to become first-time buyers? IF’s political neutrality means that we are not in the business of telling young people how to vote (although we hope as many of them as possible will exercise their right to do so); but the point we would emphasise is that claims that a Brexit vote would produce lower house prices – and that this would be a good thing for young people – need to be taken with a pinch of salt.