Although youth unemployment has continued falling over the last year, the latest evidence suggests that things could get worse again in the future, argues David Kingman 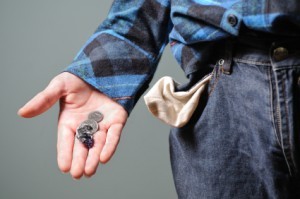 Youth unemployment has continued to fall over the past year, according to the latest data from the Office for National Statistics (ONS). These showed that the number of unemployed 16–24 year olds had fallen by 115,000 compared with a year earlier (on a seasonally adjusted basis), while employment among this age group was up by 77,000. Most significantly, the rate of unemployment among this group, at 13.8%, was almost identical to its pre-recession level in 2008.

So have young peoples’ problems been solved? Unfortunately, there is plenty of other recent evidence to suggest that the picture is far more complicated than that, for the three reasons which are explained below.

Young people continue to face falling living standards, according to a recent pamphlet from the think tank Policy Network. Young people at risk: Challenges and policy options for the UK warns that, despite the recent falls in youth unemployment, the UK continues to have a significant problem with exclusion and economic disadvantage among this age group. They particularly highlighted the distinct problems facing both disengaged young people – the so-called “NEETs” (“Not in Education, Employment or Training”) – and the many graduates who cannot find permanent employment which matches their skill level. Even for young people who do manage to enter the labour market successfully, the report warns that the spread of precarious work arrangements and stagnant real wages are having a debilitating impact on living standards.

Policy Network argue that the Government’s policy response, which under the Conservatives has mainly focused on restricting access to the social safety net and incentivising private sector job creation, has failed either to help the hardest-to-reach young people, who have the biggest problems finding work, or to improve the lives of young workers who have to deal with poor conditions.

They make three recommendations which, they argue, would help to redress this situation:

2. The risk of Brexit

Just as IF maintains a neutral stance in the Brexit debate, Policy Network also argue in their paper that a Brexit following this summer’s EU referendum would pose a substantial risk to the living standards of disadvantaged young people.

They argue that this would be for two reasons: firstly, it would be likely to harm Britain’s economy in ways that would potentially reduce employment opportunities, and secondly, it would cut off the supply of investment from the European Social Fund, which currently goes to fund projects in disadvantaged regions of the UK. They suggest that, although advocates of Brexit have keenly argued it would help young people by reducing competition from foreign migrant workers, any potential benefits from a reduction in migration would be outweighed by these two drawbacks.

The third reason to worry about the prospects of young people is that a recent analysis from the Institute for Fiscal Studies (IFS) has shown that the government’s current spending plans are likely to result in a significant real-terms cut in spending per pupil in most English state schools.

According to their paper, Long-Run Trends in School Spending in England, the commitment to freeze spending per pupil in cash terms is likely to amount to a real-terms cut of about 7–8% in real terms over the current parliament. This would be the largest real-terms decrease over any period since at least the late 1970s (although real-terms spending per pupil would still be around 50% higher in 2020 than it was in 2000-01 because of how much it increased under Labour during the 2000s).

The government is also proposing to establish a single, national formula within England for allocating school spending, rather than distributing money to each local authority for them to allocate to schools on the basis of their own formulas as they largely do now. It is too early to say what impact this may have exactly, but it could potentially reverse some of the targeting of funds towards the most disadvantaged students, which has become an increasingly important feature of the system over recent years.

In sum, youth unemployment may be falling, but the evidence presented here suggests that the UK still has a significant problem of youth unemployment being entrenched among specific groups of hard-to-reach young people, whose problems could potentially be exacerbated by a Brexit scenario and/or the reduction of spending on schools. Youth unemployment may well remain a problem throughout the foreseeable future.