Angus Hanton, co-founder of IF, sees old-age discounts as a form of age-discrimination based on several misconceptions 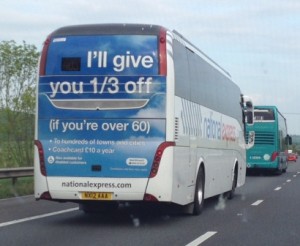 We have become used to businesses giving pensioners discounts, because in the past pensioner poverty was a widespread problem, but are they still justified, needed – or even legal?

A typical example is a barber with a sign saying “OAPs half-price haircut on Tuesday afternoon”. Why is the barber adopting this policy? Maybe it’s to attract extra business at a time when the shop would otherwise be empty, or maybe it’s to develop an old-age-friendly image. Or perhaps it reflects a practical reality that older people have less hair so it’s quicker to cut. But none of these reasons are totally persuasive.

We can see how questionable such offers are when we think about another offer the barber might make: he/she might advertise to say “half-price haircuts for married customers”. Would that be acceptable?

So why have we grown to accept that discounts for older people are fair? This is surely because society has an ingrained belief that older people are poorer than the working population and need help with prices and the cost of living. It therefore seems fair to compensate them by offering them discounts. The other ingrained belief is that retirement is short, pensioners are near the end of their lives and so they should be given a bit of charity in their last few years.

But the last couple of decades have changed for the average pensioner: finances have become easier, and there have been various increases in state help and private means so that now – as the Joseph Rowntree Foundation states – poverty in the UK is more likely to be found amongst the young than the old. In fact there are now more than a million pensioners living in millionaire households. Furthermore, retirement is typically a lot longer, due to welcome increases in longevity, so such discounts are more expensive to the providers than they used to be. Some may say these discounts look increasingly anachronistic.

Maybe they are also illegal. Is it allowed to price-discriminate on the basis of age alone?

The barber is one thing, but much larger businesses make similar offers – as the picture above shows.

Many of these offers are around travel, with discounts also given to students and younger people. So, another justification could be that discounts are a way for a business which is running with high fixed costs, and some empty seats, to fill those seats even if the business gets a lower income from those sales. In effect, what operators are saying is that those old and young who aren’t earning an income are poorer and so will be charged less to reflect that – a progressive policy of charging less to those with less income.

Some people will say that these offers are age-discriminatory, but on the other hand many of the trips that older people take are to visit their grandchildren, often to do childminding and indirectly helping the working parents. So the intention may not be to help one group rather than another, even if this is the effect.

Others may say that there is real unfairness because there are so many wealthier older people who now benefit from travel discounts and these should be stopped.

But it really matters because discounts for pensioners in the marketplace give legitimacy to a raft of government policies where benefits are handed out merely according to age, and regardless of need. For example, winter fuel allowances, free prescriptions, and free travel passes are all universal benefits given once you reach a certain age, irrespective of your wealth.

At the moment the culture of giving substantial financial perks to older people just for being old – even if they are well off – is indirectly contributing to the financial pressures on younger adults.