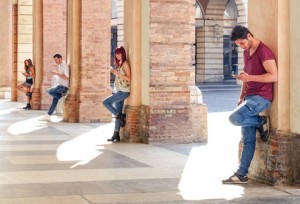 Up to 5 million people may be finding work in the online “gig economy”, according to the findings of a new piece of research undertaken by academics at the University of Hertfordshire. If this is evidence of the extent to which modern technology is disrupting the traditional economy, then what could it mean for young people who are just beginning their working lives today?

This evidence appears to underline the dramatic shift which is being witnessed in working patterns as the economy increasingly moves online, and away from the previous norm of people working full-time for a single employer. The research project used an online survey of 2,238 adults aged 16–75, of whom 11% said they had obtained work using online platforms such as Upwork, Uber and TaskRabbit. Were the findings from the sample group nationally representative, then they would mean that around 5 million workers are being employed through these platforms.

Interestingly, almost 1 in 5 of the survey sample said they had attempted to find work using these online platforms, although a large proportion hadn’t succeeded. Of those who had found work successfully, over a quarter said that these online platforms provided more than half their total income. Almost 90% of the successful platform workers said they were performing desk-based work on a freelance basis, such as graphic design or accountancy – white-collar jobs which would previously have offered a far more structured career path – and only a small minority were performing low-skilled service occupations such as cleaning homes or being Uber drivers, when you might have assumed these less skilled occupations would be more suitable for casualisation.

Ursula Huws, the Professor of Labour and Globalisation at the University of Hertfordshire who led the research, said that the findings underline the scale of the disruption to traditional working patterns which is under way:

“The sheer size of this new crowd-working army is surprising even to me and our findings confirm that policymakers and academic researchers have been caught on the hop by the explosion of what we might call platform labour. There is a real risk that the proliferation of online labour platforms will lead to an erosion of labour standards and employment rights, and hit tax revenues. It has been labeled the ‘sharing economy’ but many of those participating in it are doing so, not for altruistic reasons or in their spare time, but are instead relying on it to earn a living. A new kind of working life is emerging. For many it is a life in which they do not know from one week, day or even hour to the next when or whether they will have work, so they keep their smartphone always to hand, ready to hit ‘accept’ at a moment’s notice. They are, in short, permanently logged on.”

The end of the nine-to-five?

Admittedly, when you compare the numbers of people who could be finding work through the platform economy with the size of the labour market as a whole, even the most extreme estimates would suggest that only a minority of workers are making their living through such employment arrangements.

However, policy-makers and broader society should still be concerned, for several reasons. Firstly, the evidence on zero-hours contracts – another precarious employment tenure – suggests that young people who are newly entering the labour market are more likely than older workers to be employed using these more casual arrangements. This raises the prospect that they could become the “new normal” for younger workers, at least in certain industries or sectors which are particularly suited to using a more casual workforce. Some workers may find the flexibility which they provide advantageous, but for others they will not provide a sufficiently reliable form of employment to construct a stable adult life.

Secondly, as the study’s authors argue, governments should be concerned about the potential for workers to be exploited, the potential loss of tax revenues if people are being employed by foreign-domiciled online platforms instead of UK-based companies, and the potential for people to be left out of the UK’s social safety net if they are not paying social security contributions or being enrolled in occupational pensions, which could potentially leave them worse off in old age.

For today’s young workers, even those who are highly qualified, it seems very likely that they will have to prepare themselves for so-called “portfolio careers” where they move between a range of different jobs, and need to organise social welfare provision for themselves on a far more individual basis. Whether they are being adequately prepared for the new world of work in the 21st century by our schools and universities is an extremely important question that society as a whole must address.