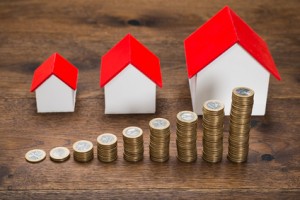 Average rents are likely to increase more rapidly than average house prices over the next five years, according to a recent projection by the Royal Institute of Chartered Surveyors (RICS).What could this mean for would-be first-time buyers?

According to the projection by RICS, average rents across England could rise by as much as 25% over the next five years. Significantly, this will be higher than the average growth in house prices, which are projected to rise by 23.5% during the same period.

According to Simon Rubinsohn, RICS’s chief economist, this rise in average rents is attributable to recent government policy. As he told the BBC, “Critically our principal concern with the measures announced by the government is that they are overly focused on promoting home ownership, at the expense of other tenures.”

RICS argues that the recent reforms to buy-to-let taxation are likely to push up rents by reducing the supply of rental property, in the absence of a general increase in housing supply. While these reforms were necessary – as IF research has previously shown – they cannot solve Britain’s housing crisis on their own without a massive increase in the annual supply of new housing, which hasn’t occurred – despite the various policy initiatives that have been launched by the current government.

What should first-time buyers do?

The extent to which the reforms to buy-to-let taxation will push up rents by reducing supply is questionable, given that low interest rates should mean that property still offers attractive returns to investors.

One of the most significant changes which the government has announced will see buy-to-let landlords who have mortgages no longer being allowed to offset as much of their mortgage income against tax. However, this shouldn’t affect existing landlords who own their properties outright or who bought with cash, or the relatively large numbers who become “accidental” landlords after inheriting a property which they decide to let out. The government has also raised the level of Stamp Duty which landlords will have to pay in future, but the average landlord will still be better off than they were previously because of the abolition of the old “slab” rates of Stamp Duty, as argued in a previous blog post.

Arguably, George Osborne also did much to help buy-to-let landlords when he lifted the cap on the number of university places in 2013, as renting out student flats is a very important part of the buy-to-let market. The Bank of England is still sufficiently concerned about the financial stability of the buy-to-let market that Mark Carney issued a warning before Christmas that further action may be necessary to curb excessive borrowing by landlords.

However, if rents do rise as quickly as RICS has predicted, then the implication is that would-be first-time buyers should do everything they can to get on the property ladder as quickly as possible, especially now that an interest rate rise could finally be on the horizon.

It’s no wonder that the government’s Help to Buy schemes are proving so popular against this backdrop, but the problem is that they can only help a relatively small number of young people. For those who are left out in the cold, accessing familial wealth is likely to become even more important for those trying to raise a deposit, but this will have obvious knock-on implications for social mobility. The next few years, it seems, could be a period in which the UK’s rapidly growing divide between the housing haves and have-nots threatens to become a chasm.