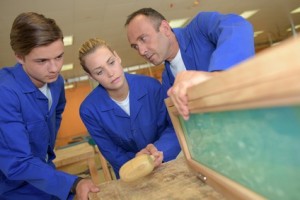 Many of us are familiar with the so-called “graduate premium” – the earnings boost which degree-holders obtain from their university education compared with non-degree holders. Various authors have attempted to quantify the scale of the graduate premium over recent years in response to the raising of tuition fees to £9,000 a year, which the government justified on the basis that the graduate premium was high enough for university to remain a worthwhile investment even at this higher cost.

However, for the other half of young people who don’t go to university, far less research has been done to evaluate the economic returns from the different alternative options which are available to them. However, a new report from think tank the Social Market Foundation (SMF) attempts to provide such an analysis.

In their report, The value of apprenticeships: wages, the SMF tries to quantify the economic returns which young people receive from doing apprenticeships, one of the main vocational alternatives to higher education. This is the first output from a larger piece of research that will continue next year, as part of which they will also try to quantify the returns to employers of taking on apprentices.

Like other types of qualifications, apprenticeships are classified into different levels in the national Qualifications and Credit Framework, depending on their complexity. The SMF focused their work in two particular areas: comparing how much people who do “Level 3” apprenticeships (equivalent to A-Levels) earn compared with people who only have “Level 2” apprenticeships (equivalent to GCSEs at grades A–C), and comparing people who have Level 2 apprenticeships with other workers who only have GCSEs. The data were based on average hourly and weekly earnings from the Quarterly Labour Force Survey between 2012 and 2014. Both comparisons controlled for other factors which might affect how much someone earns, including age, gender, ethnicity, geographical area, family, household type and type of work, in order to try to isolate the extent to which wage differentials were solely the result of having done an apprenticeship.

The SMF also found that there are significant variations in the wage premium of both Level 2 and Level 3 apprenticeships when looking at different types of work. Both types of apprenticeship create a positive earnings premium for people who work in the manufacturing and construction sectors, whereas no wage premium was found for either type of apprenticeship among apprentices in the health and social care sector. The authors suggest that this is unsurprising, as the former two sectors suffer from highly publicised skills shortages, which should drive up the wages of better-qualified young people, whereas pay in the health and social care sector is currently constrained by government cutbacks.

Are apprenticeships a good investment?

This is important, because of the government’s recent announcement that it would launch a new Apprenticeship Levy on the country’s largest employers that should raise £3 billion a year and create 3 million new apprenticeships. The SMF recommends that the government should try to ensure that as much of this new funding as possible is directed towards encouraging people to undertake higher skill apprenticeships in the sectors where they are likely to add the most value, and to try to encourage workers to move on from doing Level 2 apprenticeships to Level 3 ones, possibly by offering combined ones.

In a broader sense, with the government having recently announced the launch of another new initiative (the “Teaching Excellence Framework”) to try to measure the returns of higher education for students, this SMF study re-emphasises the need to provide young people with as much information as possible to help them make the right decisions about their future, whichever direction they decide to follow after leaving school.