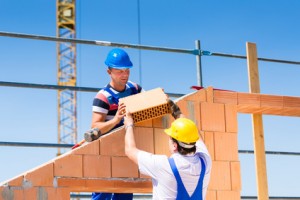 It’s no secret that Britain doesn’t build enough new homes to keep up with demand. Given that he Conservative housing minister, Brandon Lewis, has recently declared an official target of getting one million new homes built by 2020, more and more attention is being paid to the issue of why the country is only building roughly half the number which is needed.

Who could be better to ask than Britain’s housebuilders than themselves? This seems to have been the idea behind Building for Growth, a recent report by Lloyds Bank which was based on a survey of Britain’s housebuilding firms, which provides a picture of how they view the industry.

The overall message conveyed by the house building industry in this survey is one of optimism; 70% of the firms taking part said they are confident about the industry’s future growth. Between them, they expect their turnover to increase by 25% between now and 2020, which will see them create a net 100,000 new jobs. As building new homes is the bread-and-butter of how the industry makes its money, this should mean that output is set to increase.

The report also highlighted two particular issues which the housebuilders said are holding back the delivery of new homes. Firstly, planning delays – when asked to give the main reasons why they think new housebuilding is so inadequate, 46% of the firms cited the planning system being too slow, while 42% identified opposition to new development, which will often be expressed through the planning system.

Planning constraints have long been acknowledged as one of the major obstacles: the Callcutt Review of Housing Delivery, published in 2007, estimated that the average housing development takes two years to progress from pre-application negotiations with the local planning authority to the beginning of the actual construction work (and then it takes a further eighteen months before the homes are ready to be sold and the housebuilder can start making money). This introduces cost and uncertainty into the process which means many potential developments are not taken forward and makes the ones which are successful more expensive as a result. Of course, no-one argues that protecting the environment and balancing the amenity of existing residents aren’t important concerns; but Britain’s relative failure to build enough new housing compared to other developed countries suggests that the balance between these laudable aims and the need to build new housing isn’t being struck successfully.

Secondly, the housebuilders also emphasised skills shortages as a significant barrier which holds back housing delivery. Overall, 87% of the firms that took part said they are looking to recruit more workers during the next year, but a quarter of them identified a shortage of workers with the right skills as the biggest challenge facing their businesses. Site managers and electricians are professions in which these firms said they had the biggest difficulties recruiting, although shortages of architects, quantity surveyors, bricklayers, carpenters and plumbers were also highlighted as problems.

This issues has been highlighted previously: a survey released earlier this summer by the Federation of Master Builders showed that two-thirds of small- and medium-sized builders were turning down construction projects because they didn’t have enough skilled staff to complete them. Making greater use of apprenticeship schemes has been suggested as one way for firms to help create more skilled workers, although obviously this will take time to bear fruit.

One of the survey’s most interesting discoveries was that the housebuilders would welcome more involvement by the state in providing new housing: when asked what change they thought would have the biggest impact on alleviating the housing shortage, 23% said it would be support for local authorities to promote and funding building projects. Given that the level of housebuilding which we need to keep up with demand in Britain has only ever been achieved during the post-war period when local authorities were building substantial numbers of council homes, it seems there may be a growing awareness that a return to some kind of direct state involvement in housebuilding is necessary in order to deal with the current crisis.

Take with a pinch of salt?

The findings of the Lloyds survey are interesting, as ultimately we depend on private housebuilders to deliver the vast majority of new homes in Britain. However, like all survey findings they should be taken with a pinch of salt, particularly as the interests of housebuilders and would-be house-byers do not necessarily align. Given that high house prices suit the interests of builders, they are never going to argue for a return to 1950s levels of housebuilding if they can help it; nevertheless, the concerns they raise about the industry are important, as we are relying on them to build the homes that Britain needs.